The Bank for International Settlements (BIS) – an organization composed of the world’s central banks – has released a disturbingg new report on the state of Canada’s economy.

According to the BIS, Canada’s rising debt levels could put stress on the financial system, which makes the economy more fragile and susceptible to a crisis.

The report focused on the change in the credit to GDP ratio. The higher the ratio, the more the economy is dependent on debt, and the more damage could be caused by interest rate hikes that raise borrowing costs.

Canada’s credit to GDP ratio is up 17.4 from the trend, meaning the amount of debt in the system is increasing to massive levels. Only China – facing massive unresolved debt problems – had a higher increase than we did.

The BIS expressed concern at what is happening in Canada, saying “Early warning indicators for financial crises continue to signal vulnerabilities in several jurisdictions,” which includes Canada.

Of note, the credit to GDP gap is up dramatically since 2015, when the Trudeau government took power – which you can see in the chart below: 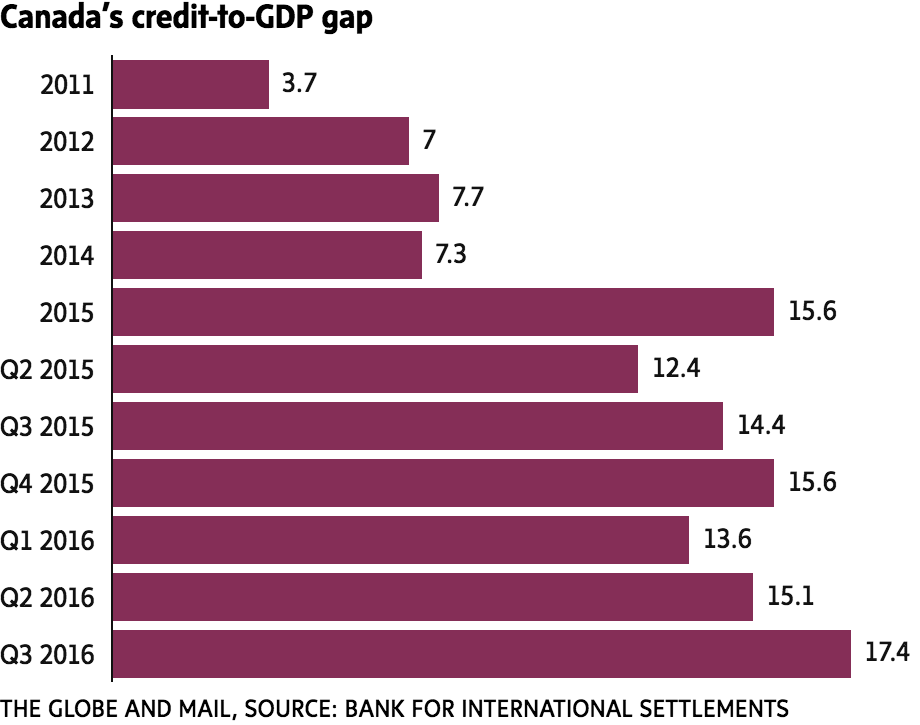 It’s not just the credit to GDP gap where Canada faces problems.

The property price gap is going up as well. Prices are up 11.6 vs the original trend. For comparison, the US gap is 5.1. This is a big part of why housing seems unaffordable for so many Canadians.

That is a significant concern. The more we are paying to service debt, the less money there is for tax relief, infrastructure, healthcare, education, investment, new construction, etc. Too much debt can grind an economy to a halt, and Canada is in a dangerous place right now.

Said the BIS, “Under more stressed conditions – a 250-basis-point increase in rates – and assuming 100-per-cent pass-through, the numbers point to potential risks in Canada, China and Turkey.”

Canadian families and consumers are already facing severe pressure. As the Globe & Mail noted, Canadian households have a whopping $2 trillion in outstanding debt. That is the highest debt level of any G7 country, as a percentage of the economy.

The already high cost of serving that debt is expected to go up, as interest rates are projected to rise slowly over time.

A natural consequence of an out-of-control government

Canada’s serious debt problems are a natural consequence of an out-of-control government that no longer serves the people who elected it. High taxes, fees, and regulations all increase the cost of living. The cost of housing spiraled out of control as our government let Canada become a haven for wealthy property owners from around the world – who drove up the cost of housing and pushed it out of the reach of many middle class Canadians.

Making matters worse, the upcoming carbon tax will make businesses less likely to invest, and make everything more expensive, driving up the cost of living even more.

All of this forces Canadians to go further and further into debt just to make ends meet. Instead of reducing taxes and lowering costs which would leave us with money in our pockets, the government is doubling down on the same approach that has put our economy and financial system at risk.

If these trends continue, Canada could be heading towards a massive economic crisis, and we will have to change course rapidly to prevent it. Considering the dangerous ideological approach of the Trudeau government, it now seems certain that the only way to reduce the risk of a crisis is to get a new government in power.