With so many people simply watching and waiting to see what an ‘expert’ tells them to do, we miss out on opportunities to take proactive measures and control our own future.

There have been two consistent trends throughout the past year and a half:

First, individuals deemed to be ‘experts’ have gained more and more power.

Second, those ‘experts’ have demonstrated a growing level of incompetence.

Here in Canada, we know the situation well:

Early on, when the virus could have been mitigated before it had spread from China, our ‘experts,’ including Dr. Theresa Tam and Patty Hajdu said it was ‘low-risk,’ said it wouldn’t spread much in Canada, said it would be contained, and said ‘stigma’ was the biggest threat.

They repeatedly opposed border controls, until it was too late.

Of course, the incompetence went even further, as the Trudeau government had crippled Canada’s pandemic early warning system, and gave away much of our PPE to China, only to later desperately try and buy PPE from that same country.

Our PPE stockpile had also degraded over many years, and was not replenished.

But that was just the beginning.

Ever since the virus arrived in Canada, we have witnessed what can most charitably be described as ‘desperate flailing’ when it comes to the ‘experts.’

Advice on masks flipped, the vaccine procurement was weak, and the advice on vaccine dose intervals seemed to follow the political imperatives of the vaccine supply, rather than the actual science on efficacy.

Consider the messaging on AstraZeneca, where Hajdu and the ‘government experts,’ first said there was no concern, then the concern was enough to recommend people get other vaccines instead, and then they proposed ‘mixing-and-matching.’

All along, there was even differing advice from different ‘expert groups’ within the government, with the National Advisory Council on Immunizations often giving different opinions than the Public Health Agency of Canada, sowing even more confusion.

And of course, we can’t forget that all this time, even as we faced draconian lockdowns here at home, flights carrying infected people were pouring into the country.

The ‘experts’ also revealed how deeply politicized they had become, when they suddenly shifted all their messaging to encourage BLM protests, claiming ‘racism is just as big a public health threat as the virus.’

So much for ‘following the science.’

It isn’t just what the ‘experts’ said that was such an issue, it’s what they didn’t say.

From early on, it was clear that obesity and Vitamin D deficiency contributed to more serious negative outcomes among those infected.

In fact, obesity is the highest risk factor for negative outcomes aside from age.

But how often did you hear the experts say this?

How often did you hear the experts warn people about the danger of being overweight?

How often did you hear the experts push for a campaign to distribute Vitamin D?

How often did you hear the experts encourage people dramatically increase how much they exercised?

How often did you hear politicians (who claimed to be listening to the ‘experts), propose programs to make exercise equipment more affordable?

The answer to those questions of course is “almost never.”

They rarely, if ever talked about it.

And beyond just not talking about it, they pushed for policies that did the opposite.

They told everyone to stay inside.

They shut down gyms.

They shut down outdoor activities, even outdoor fitness activities, despite the incredibly low risk of outdoor viral transmission.

So, they were not only failing to give advice that could have helped people take proactive measures to reduce their risk, but they also advocated against that in many cases.

Credibility must be earned

In a crisis, people look to those with credibility.

Generally, a ‘title’ or ‘position’ is the shortcut to credibility.

Understandably, many will assume that someone who has a specific title or position must be there for a reason, and will thus feel that they can trust them.

With that in mind, what matters is not being 100% right on assessing the credibility of experts at the beginning, since that is impossible to know, but instead being able to change those assessments based on new information and ongoing performance.

And that assessment leads us to conclude that many of the ‘experts’ in charge during this crisis have been simply incompetent and far less accurate than many ‘regular people.’

As you can see in the following emails – part of the Fauci Emails released in the US due to Access to Information Laws, there were early warnings about COVID coming from a lab in China, at a time when Fauci and many experts were outright dismissing that possibility:

“An April 2020 email from NIH Director Francis Collins to Fauci under the subject line: Conspiracy gains momentum. The email included a link to an article about Brett Baier saying on FOX News that covid outbreak started in Wuhan lab. Fauci’s response is redacted.”

An April 2020 email from NIH Director Francis Collins to Fauci under the subject line: Conspiracy gains momentum. The email included a link to an article about Brett Baier saying on FOX News that covid outbreak started in Wuhan lab. Fauci's response is redacted. pic.twitter.com/G8F7SUB23U

“Here’s a Feb 21, 2020 email to Fauci from a Weill Cornell Medical College associate professor of dermatology who wrote: “we think that there is a possibility that the virus was released from a lab in wuhan, the biotech area of china”

Here's a Feb 21, 2020 email to Fauci from a Weill Cornell Medical College associate professor of dermatology who wrote: "we think that there is a possibility that the virus was released from a lab in wuhan, the biotech area of china"

Another email shows discussion of the virus having features that look “potentially” engineered: 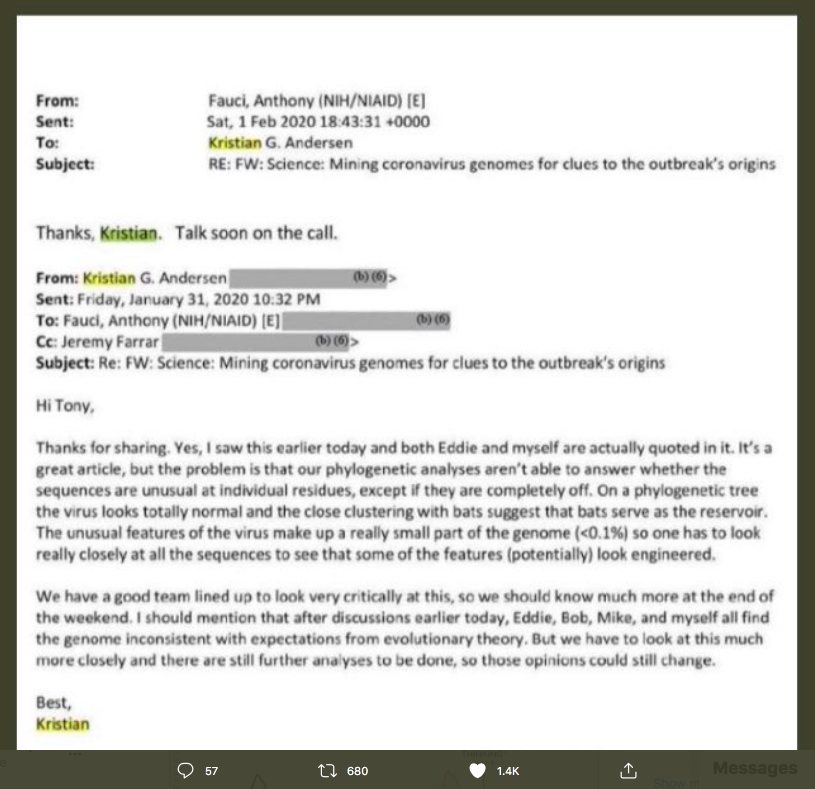 Again, this is all part of the process, in terms of studying and trying to discover the truth. The problem is that while this was happening behind the scenes, the ‘experts’ continued to act as if there was no chance it emerged from a lab in China.

Why say one thing behind the scenes, and another to the public?

As the level of ‘expert’ incompetence has grown, many people have seemingly responded by doubling-down on their belief in the experts, and their denunciations of anyone who questions that belief.

In some ways, that is an understandable reaction.

In a chaotic and unstable world, it is reassuring to believe that the people in charge are looking out for all of us and are highly-competent.

To believe otherwise would require an acknowledgment that we must take more personal responsibility for our health, our fitness, and our preparedness for a crisis, which is a scary thought to many individuals, especially as our society has become far more government-dependent.

And yet, true empowerment comes through seizing control of our own future, and that requires realizing that the government is looking out for the interests of the government, not our interests.

Governments want to expand their power, and stay in power.

At different times, that may or may not line up with our own interests, but that is merely incidental.

Rather than depending on ‘experts’ who have been wrong repeatedly, we can become more self-reliant, and learn from each other.

Consider the so-called ‘gym bro’ community, who (while the experts were either dismissing the virus or later on pushing for nothing but lockdowns) – were instead advocating for the importance of Vitamin D, more outdoor activity, losing weight, eating healthy, lifting weights, and staying active, all things that help reduce people’s vulnerability.

They were proposing real, tangible things that each individual could control and could do for themselves, while the ‘experts’ were promoting a fear-based attitude that involved simply sitting at home and waiting for ‘others’ to fix the situation.

It’s no coincidence that the ‘expert’ advice has further deepened the mental health crisis, because nothing is worse for someone’s mental state than a combination of fear and helplessness, the exact messaging the ‘experts’ and ‘politicians’ so often give.

Putting all our faith in the ‘experts’ has had profoundly negative consequences, and we cannot continue to make that same mistake.

While the government buys off more and more of the establishment media, I am an Independent voice. If you value my perspective, you can make a contribution through PayPal, or directly through Stripe. Your support is greatly appreciated.