Why is it that it’s always ‘safe’ for politicians to do what they want, but not for the rest of us?

That quote is from the movie Dodgeball, and you may be wondering what it has to do with anything?

Well, it’s time that we say something similar to politicians:

“If you can campaign, we can go back to normal.”

Justin Trudeau obviously feels it’s safe enough for he and his MPs to go doorknocking, hold rallies, gather with people, and interact in person with voters during a federal campaign.

If they can do that, surely the rest of us can go back to normal, right?

As of late, federal party leaders like Erin O’Toole and Jagmeet Singh have been talking about how there shouldn’t be an election during ‘the fourth wave.’

Jagmeet Singh went all out, writing an open letter to Justin Trudeau opposing an election because ‘The pandemic isn’t over”:

“The pandemic isn’t over

Calling an election is selfish

PM Trudeau can bring his Ministers back from the pre-campaign trail, recall the House and get to work

The pandemic isn't over

Calling an election is selfish

PM Trudeau can bring his Ministers back from the pre-campaign trail, recall the House and get to work

I've written him reminding him that New Democrats are ready to return to Parliament and keep fighting for Canadians pic.twitter.com/ruDCXm62eU 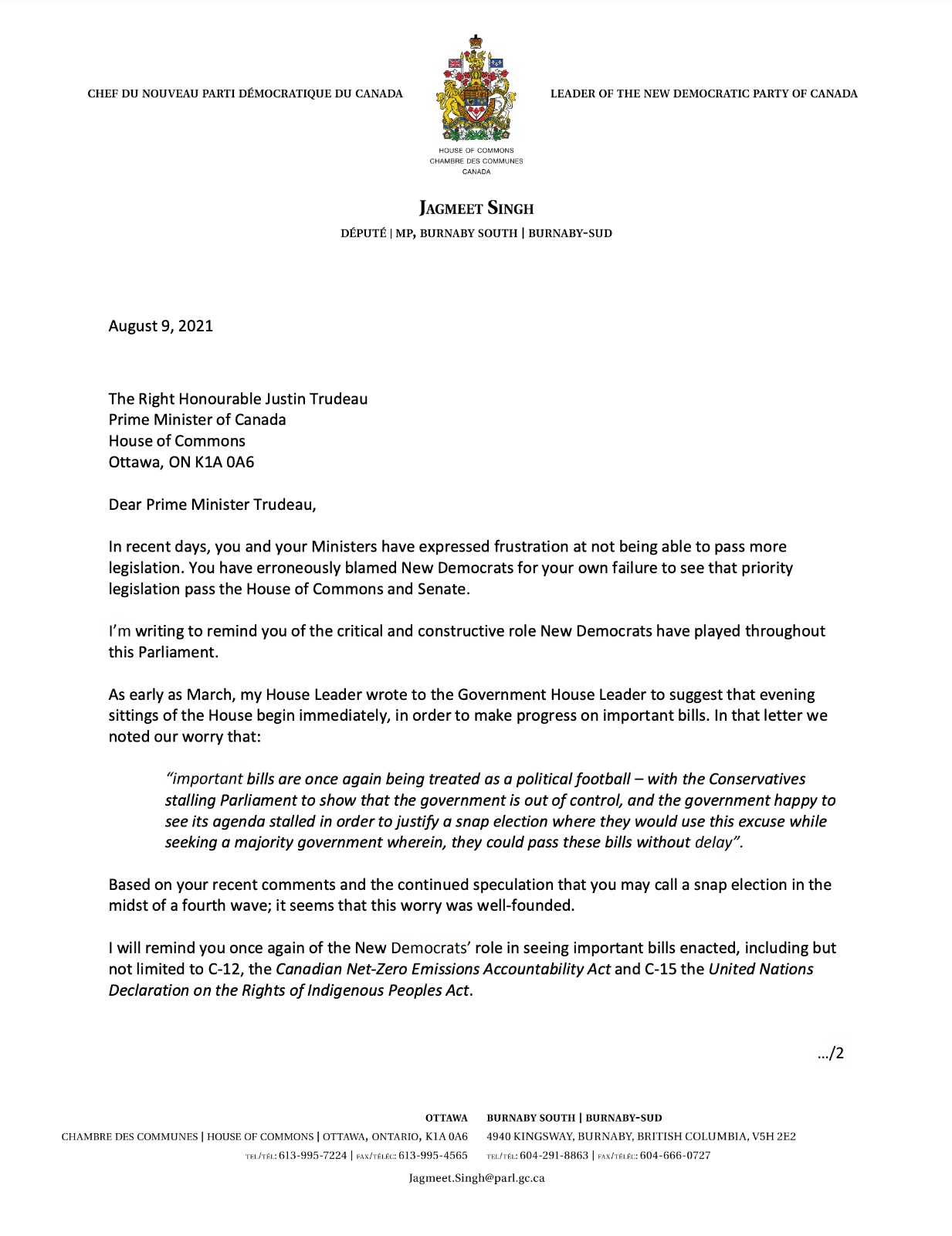 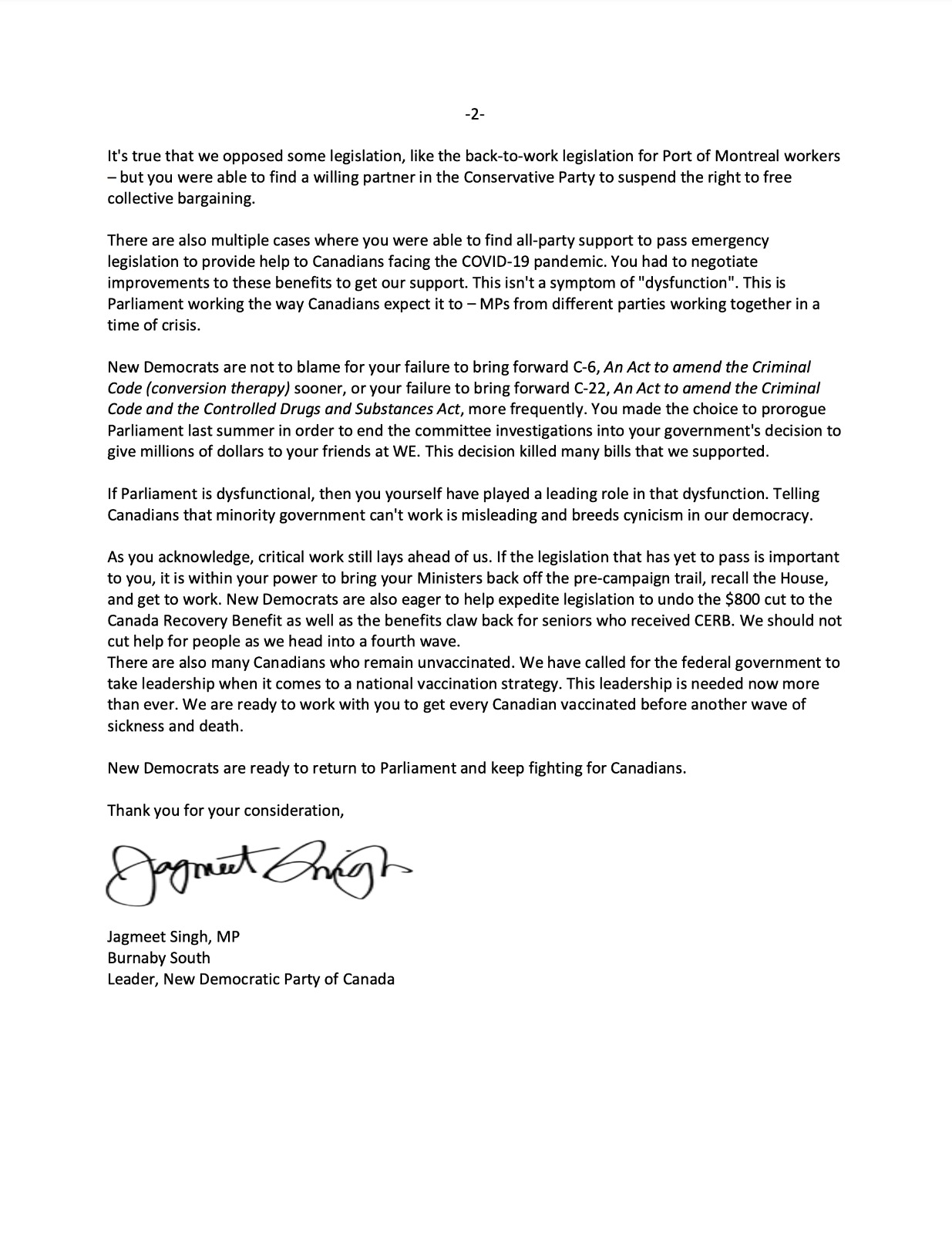 But, as was pointed out on Twitter, Jagmeet Singh was totally fine with an election in BC when COVID was far worse – he even called it safe:

“Here is Jagmeet Singh telling British Columbians during a pandemic that it was safe to vote. Why was it safe to vote then, before vaccines, and not now? Political calculus, and not Canadians. That’s the only difference. #cdnpoli”

Here is Jagmeet Singh telling British Columbians during a pandemic that it was safe to vote. Why was it safe to vote then, before vaccines, and not now? Political calculus, and not Canadians. That's the only difference. #cdnpoli https://t.co/W3wQELhQjn pic.twitter.com/mBqszhVsp6

In October of 2020, covid deaths were higher than they are now, and the first vaccines had not yet been administered.

Why would it be safe to have an election then, but not now?

Has ‘the science’ changed?

Or is it that the NDP is short on money?

Which could it be?

Singh isn’t the only hypocrite of course.

It seems Patty Hajdu is ready to go doorknocking:

“This is Jack. He’s pretty bummed he can’t come door knocking with us tonight. But you can! Reach out to patty@teampatty.ca to get details on all things campaign”

Hajdu is also out and about without masks:

“The misty day didn’t stop people from the joy of seeing one another at the Gathering of the People Pow Wow and at the Sleeping Giant Folk Music Society Live at the Bedrock Festival. A big miigwech for organizing these events so safely!”

The misty day didn’t stop people from the joy of seeing one another at the Gathering of the People Pow Wow and at the Sleeping Giant Folk Music Society Live at the Bedrock Festival. A big miigwech for organizing these events so safely! pic.twitter.com/r3Kml4C23p

Jagmeet Singh is also ‘campaigning’ without a mask on:

I get to meet so many young and brilliant people across this country who inspire me like Dani, who I met today in Bathurst, New Brunswick!

Dani is an enviro studies student and she gifted me a rock from Mount Carleton, the highest mountain in NB.

The reason I point this out is not to say that they should be masking up, but to note how Singh and Hajdu and others will likely push mask mandates and vaccine passports, while themselves acting like they don’t see the virus as much of a threat.

It’s a trend we’ve seen throughout the pandemic: Politicians who are glad to exploit fear of covid to expand their power, while acting in their own lives as if they don’t see it as a big deal.

And before someone says that parties will be changing everything up and going virtual, note that they all plan to hold in-person rallies:

“Liberal, Conservative and NDP insiders say their campaigns are still trying to figure out the details of events. All three parties are planning to hold in-person rallies, in some form, within health rules.”

What we are seeing is that the political parties are seeking to go as much ‘back to normal’ as they can when it comes to running a campaign, while still preventing a return to normal for the rest of us.

Indeed, they are more than willing – and seemingly even eager – to play into the ‘fourth wave’ fear.

One set of rules for them, another for us

We remember when politicians were being slammed left, right, and centre for all their travelling and vacations at the exact same time as they were telling everyone else to ‘stay home and save lives.’

We were supposed to stay home and watch small businesses get wiped out, while they were free to go about their business, travel the world, and keep getting their full salary.

And, we certainly remember how all the really aggressive border and travel restrictions only happened once all the politicians were safely home from their overseas jaunts.

As SLN said on Twitter in response to my article on how politicians are keeping the feeling of fear and crisis going, they say we can hold an election:

“Absolutely creates fear, yet we can safely have an election.”

Absolutely creates fear, yet we can safely have an election. https://t.co/xar32nIEBJ

This is how you can tell that the parties are seeking to manipulate us:

The fear ratchets up when it benefits them, and ratchets down when it serves their interests.

It’s not about ‘following the science,’ it’s about gaining power and influence over the populace.

There is not such thing as ‘zero-risk’ and ‘zero-covid’ is an unrealistic goal.

Instead, every individual should be free to take their own level of risk, and choose to get vaccinated or not.

People are free to stay home and free to mask up at all times, but they shouldn’t be able to force that on people.

And politicians should be free to campaign and meet voters and hold rallies, but they shouldn’t be able to do that while still pushing restrictions or mask mandates or mandatory vaccinations.

These hypocrites shouldn’t be able to have it both ways.

Defeating those who support restrictions

It is also essential for Canadians to research into the stances politicians have taken – and are taking – on lockdowns and vaccine passports, and seek to defeat those who continue to oppose our country returning to normal.

Support for vaccine passports should be an automatic ‘no’ when a politician campaigns for votes, and we need to support those who are standing against vaccine passports and are fighting for the rights and freedoms of Canadians.

CBC and much of the establishment media are dependent on government funding, and subservient to the Liberals. Only independent media can push back and fight for the truth. If you value my perspective, you can make a contribution through PayPal, or directly through Stripe below. Thank you.