The establishment press once again comes up with a narrative that serves the interests of the federal government, rather than serving the People.

With the Freedom Convoy gaining strength as it heads to Ottawa, with Canadians showing their support financially, in person, and online, it was perhaps inevitable that the establishment press would jump in and try to spin a narrative to demonize Canadian truckers.

This story, from Global News, has it all.

Here are a few excerpts:

“Canadian far-right and white nationalist groups see the so-called “Freedom Convoy” as an opportunity, with some hoping the protests will be Canada’s version of last year’s Jan. 6 riot in Washington.

Hundreds of truckers and their supporters are making their way from B.C. to Ottawa for a planned protest outside Parliament on Saturday.

The loosely-organized group – has raised almost $4.5 million through GoFundMe since Jan. 14 – and is said to oppose vaccine mandates, particularly a new vaccination requirement for truckers crossing the Canada-U.S. border into Canada.

But a review of the protesters’ online communications, including real-time chatter over walkie-talkie app Zello, suggest a collection of grievances and anti-government sentiment that extends beyond vaccine mandates.”

Though the article says “And while the most extreme voices likely do not reflect the position of most protesters, it’s clear that those extreme voices are hoping to capitalize on their anger,” they go on to list a few comments that will no doubt seem controversial, clearly attempting to paint all the truckers with a broad negative brush.

For contrast, this is the actual message of the Freedom Convoy. 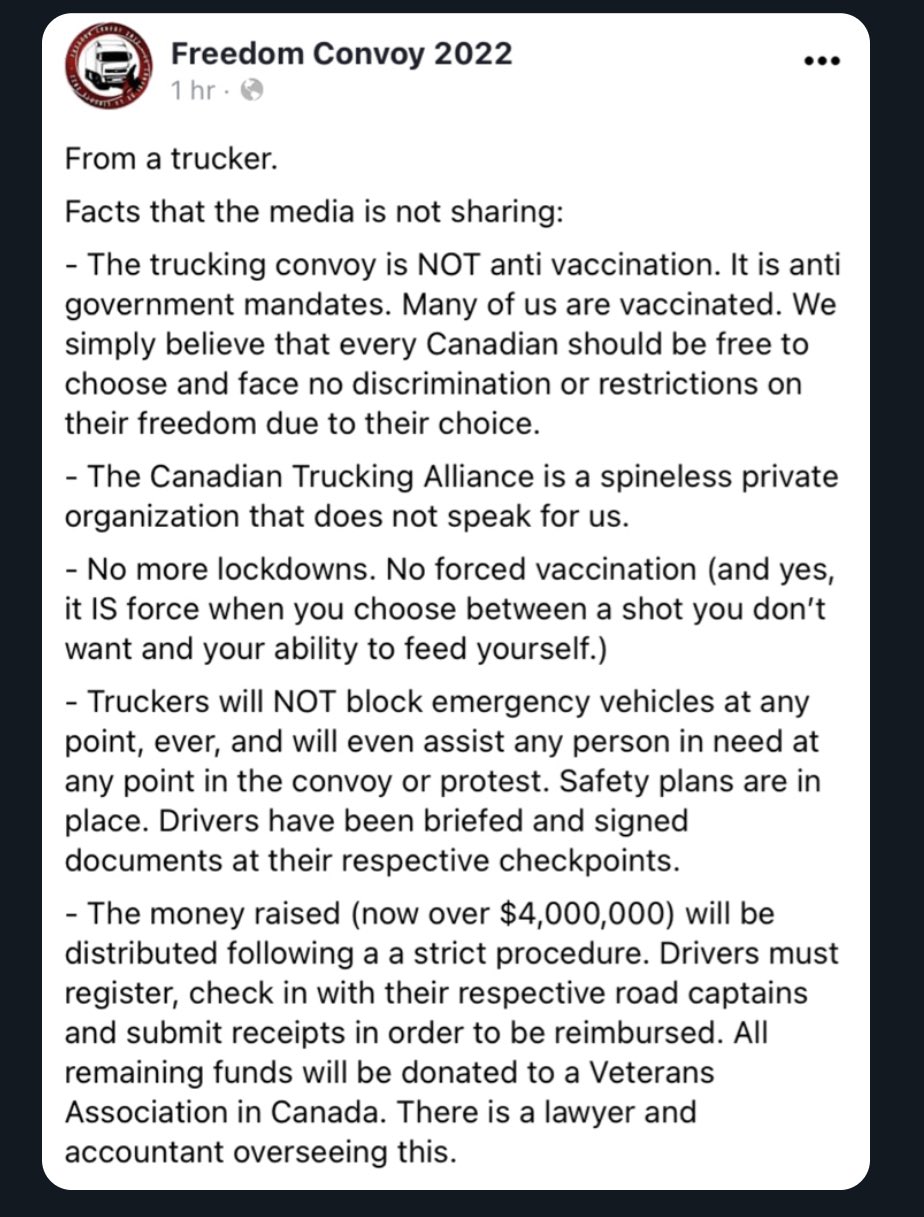 Why draw attention to this?

You may ask why I’m even drawing attention to the attempt by the establishment press to demonize the Truckers.

Well, it’s because many people will only read the Global News headline, or will hear a few of the scary ‘trigger words,’ and will thus form their opinions based on that.

Only by first understanding the tactics being used by the establishment press, and countering them in conversations and communications with others, can we push back against the false negative narrative and stop it from being entrenched.

To start with, the media knows many people will just see “far-right,” “trucker protest,” and “January 6th,” and not even read any further.

A few who do read further will see the term “white nationalist” and immediately smear the whole protest as racist.

The media has been priming people with those buzzwords for years, and they know how to use those words to ‘activate’ the general public and make them feel afraid.

And, showing how their actions go hand in hand with the government, the establishment media is using the same wording Trudeau uses when he denounces those who disagree with him.

It is very important to note something else about how the establishment is trying to demonize the truckers’ protest.

They are using a tactic that is often used in Canada whenever anyone pushes back against authority.

They try to frame any such effort as something ‘extreme’, and convince most people to distance themselves from it, in order to remain in the ‘proper good graces’ of those in power.

You see this whenever Canadians start to aggressively speak out against the government, particularly when it’s a group who would be considered to be more ‘conservative.’

Even the use of the term ‘anti-government’ as if that is supposed to be a bad thing is quite indicative of the mindset of the establishment press, as they seem to think that the government is automatically owed deference and respect, despite the fact that in any half-functioning democracy the government has to earn whatever respect it gets.

These same tactics are used on issues like healthcare – where any talk of ‘private’ delivery is seen as beyond the pale, immigration – where any opposition to record high immigration levels is smeared as ‘racist,’ and even discussion of the military, where the idea of building up a strong Canadian military force is often seen as somehow ‘unCanadian’ or ‘too aggressive.’

All of those terms are used to try and shut down debate before it even starts, to convince the average, middle-of-the-road Canadian to never delve any deeper into what is actually happening.

What makes this all the more interesting is that the establishment press demonstrates weakness by attempting to so relentlessly gatekeep what is and isn’t ‘acceptable’ to say, believe, and do, in this country.

If they were truly confident that they could win open and real debates, then they would welcome them.

But instead, they seem terrified of issues actually being discussed, and instead attempt to demonize anyone who dares step outside the pro-government, pro-statist orthodoxy.

Even with all their funding, all their government money, and all their advantages, the establishment press finds itself losing market share to independent media.

And just look at the massive outpouring of support for the truckers’ protest.

Canadians of all backgrounds and all walks of life have demonstrated their support, and the protest has continued to grow.

That was achieved through decentralized organization, with people spreading the word online and to each other, without any of the massive advantages of the media/government propaganda apparatus.

This is what the establishment media and the government fears, the self-organized, independent efforts of freedom-loving Canadians, Canadians who aren’t waiting around to get ‘permission’ from the state, and instead decide to make our voices heard on our terms.

Beware those who want to restrict your access to information

While the establishment uses rhetorical tricks to try and demonize opposition to Trudeau’s vaccine mandate for truckers, and tries to discredit opposition to the government as a whole, they are also working behind the scenes to try and narrow the bounds of debate and information in Canada.

As we know, much of the establishment press advocate for the legislation the Liberals are pushing when it comes to the internet, legislation that would make Canada a far-less free and open place for discussion, debate, and ideas.

The establishment wants this because they would rather silence independent media than compete with them, as they seek to deprive Canadians of the right to choose which sources of news, opinion, and information they trust.

We should always beware those who – like all tyrannical governments and movements – attempt to restrict your access to information.

Instead, we should be guided by a commitment to openness, truth, vibrant and lively debate, and a country where freedom is our most cherished value.

With our rights and freedoms under assault from power-hungry politicians and much of the establishment media, Independent Media is one of the few remaining sources of truth left in our country. If you value my writing and perspective, you can show your support by making a contribution through PayPal, or directly through Stripe below.