Jean Charest is attempting to ret-con his time as Quebec Premier, acting as if it was deeply conservative:

“When I won the first of three consecutive elections and took over the reins of the second largest province in 2003, the economy was suffering.

Under my leadership, we swiftly turned things around with Conservative policies, and I’m proud of our economic record.”

When I won the first of three consecutive elections and took over the reins of the second largest province in 2003, the economy was suffering.

Under my leadership, we swiftly turned things around with Conservative policies, and I'm proud of our economic record. #cpcdebate pic.twitter.com/DzdRqMiK5h

There’s one thing Charest left out however:

Governments in Quebec have often sought to oppose pipelines and energy projects, even as they made use of money provided by Alberta’s energy sector.

For Charest to claim that his fiscal record is ‘conservative’ while not acknowledging the role equalization payments played in ‘fixing’ the economy is disingenuous.

Basically, economic strength in Alberta and other parts of the country made it possible for Charest to claim economic ‘success’ in Quebec.

Just look at the chart below: 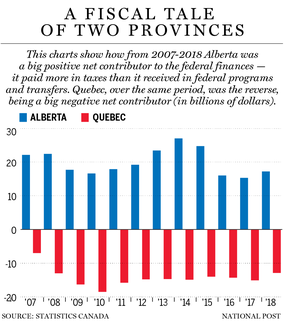 Starting in 2008, you can see the surge in Quebec’s net transfer payments. While some will claim this is because of the financial crisis, all of Canada went through that crisis. And as you can see, Alberta still kept on giving far more than they received.

And let’s talk about Charest and ‘tax cuts’.

In 2010, Charest introduced a massively unpopular budget that was laden with massive tax hikes.

Here’s how it was described by Macleans at the time:

“Massive tax hikes in his spring budget are killing Quebec Premier Jean Charest’s poll numbers. A whopping 77 per cent of Quebecers disapprove of the Liberal leader, according to a poll conducted for Le Devoir, with only 21 per cent saying they’re very satisfied or satisfied with his government. “We’ve never seen anything like it,” said Christian Bourque, spokesperson for the firm that conducted the poll. On Sunday about 50,000 people rallied against the budget, which includes two increases to the provincial sales tax, a four cent increase in fuel tax, a $200 charge for health care and a $25 fee for doctors visits, amongst other increases. Rejean Pelletier, a political scientist at Laval University, says Charest has “in some ways, given up,” and that “he doesn’t seem interested anymore by Quebec politics and might be looking for a way out before the next election.””

If benefitting from federal transfers and hiking taxes is what Charest brings to the table, it’s no wonder that so many Conservatives are deeply opposed to his candidacy.

We need to stand up to the dishonest narratives of the establishment media. I am fighting for the truth, and if you value my work, you can make a contribution through PayPal, or directly through Stripe below.