Those who once crowed about unity seem intent on division.

The Charest campaign is having to respond to growing accusations that they may end up trying to split the CPC if Charest is rejected by the members:

And now, facing the possibility of rejection by Canadian Conservatives, there are growing indications the Charest camp is mulling over the creation of a new party:

“The Charest camp (and in particular the ‘Rising Star’ who is using this race to sell her book) are pretty openly talking about creating a new party if (when) they don’t win the CPC leadership.

The Charest camp (and in particular the 'Rising Star' who is using this race to sell her book) are pretty openly talking about creating a new party if (when) they don't win the CPC leadership.

Now, in response to an article about the uncertainty over whether Charest would remain as a Conservative Party member if Poilievre wins, the candidate had to issue a defensive Tweet:

“I’ve been a proud Conservative for over 30 years and will always remain one. I am running to unite Conservatives and beat Justin Trudeau to get our country back on track.”

I’ve been a proud Conservative for over 30 years and will always remain one. I am running to unite Conservatives and beat Justin Trudeau to get our country back on track.

I need your help to get it done, visit https://t.co/9GsG6gKIm8 to support my campaign. #cdnpoli https://t.co/uE8YUqGyb0

Charest’s campaign co-chair seems to be singing a slightly different tune however:

“But the fact remains that in the entourage of Jean Charest, the hypothesis of a kind of center-right coalition has been openly discussed for several weeks.”

“Here is what Kheiriddin writes, translated by Radio-Canada: “Given the acerbic climate which reigns in the race for the leadership of the Conservative Party, it will be very difficult for the supporters of one of the two camps to live in harmony with the other field. A centrist party will alienate populists. And vice versa. There is a third possibility: the recreation of a liberal-conservative party, like the one that founded Canada. »

“In short, the campaign to appoint the next Conservative leader is only the first act, not the epilogue. What is being prepared, the plan B which is being discussed, is a possible in-depth reconfiguration of the federal partisan political map.”

This has put the already-struggling Charest campaign even more on the defensive, as it has made his “unity” message look like nothing but a ploy.

Both the Charest and former Patrick Brown campaigns spoke about “uniting” the party, but gave the distinct impression that they would be glad to split it if Poilievre wins.

It would seem that the political establishment believes “unity” is only for them.

Facing possible defeat, it would seem that “division” is the order of the day.

With their narrative falling apart, the Charest campaign has latched onto a third CPC leadership debate as a possible distraction.

The Charest campaign has been pushing relentlessly for the debate.

Now, the CPC Leadership Election Organizing Committee (LEOC) has announced a third debate will be held.

But that’s already falling apart, with both Leslyn Lewis and Pierre Poilievre appearing unlikely to participate. 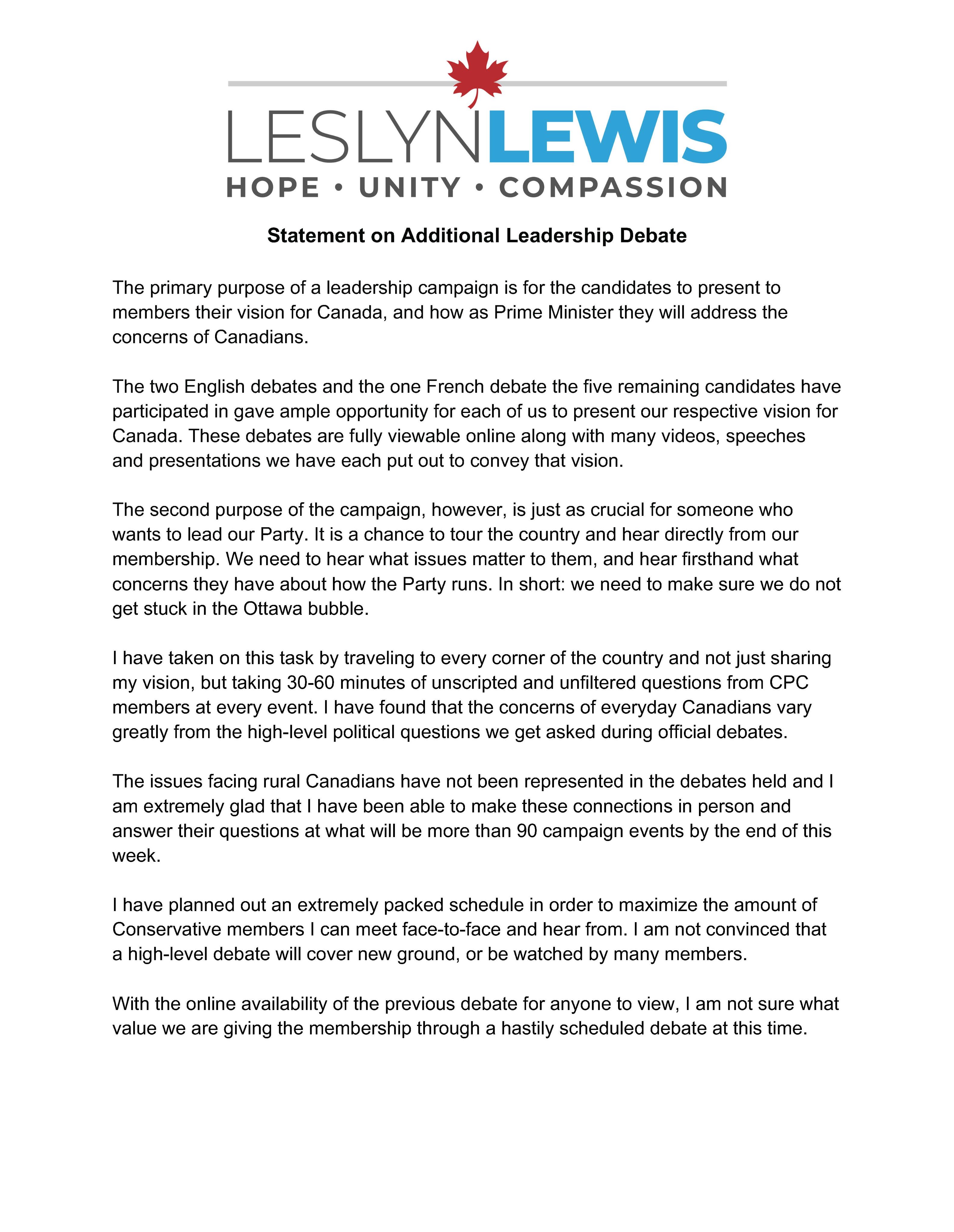 Statement from the Pierre Poilievre campaign re: LEOC’s decision to propose another leadership election debate pic.twitter.com/HdksWKsqYX 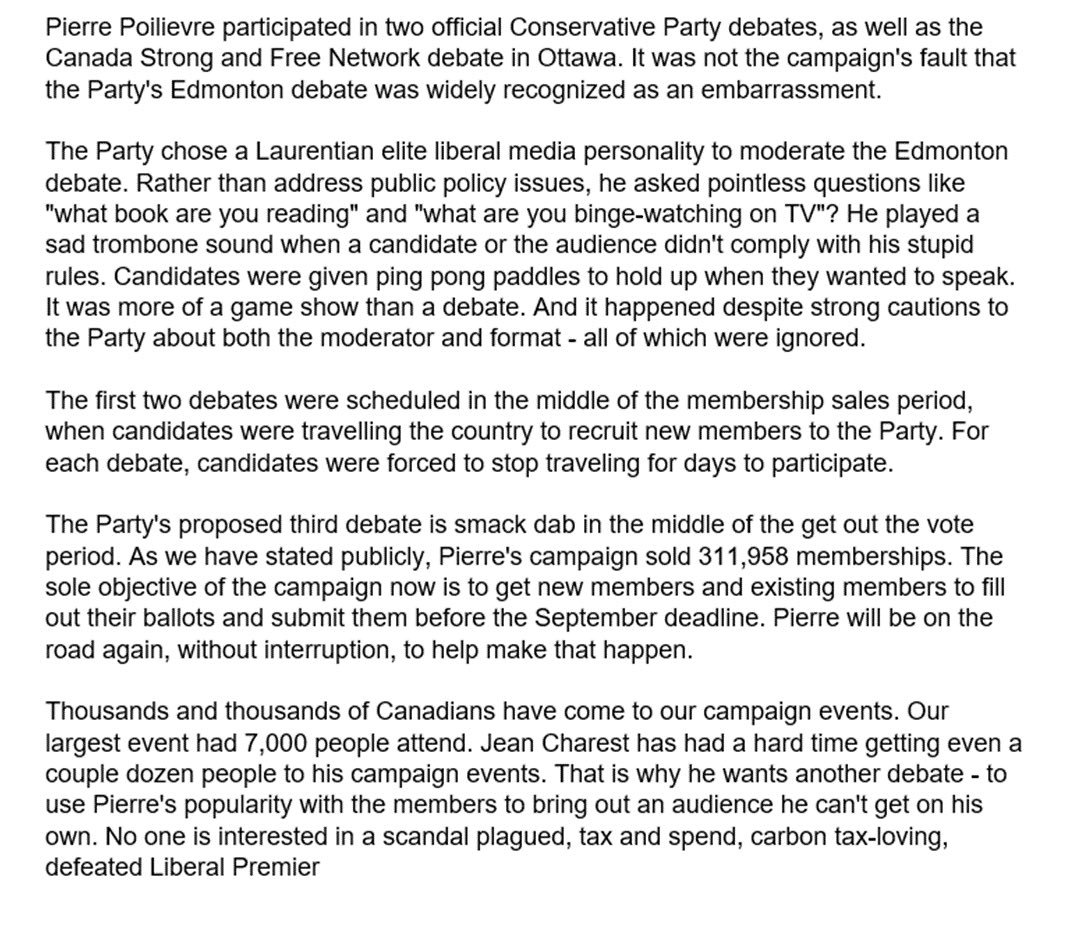 Unsurprisingly, the Charest campaign released a statement of their own: 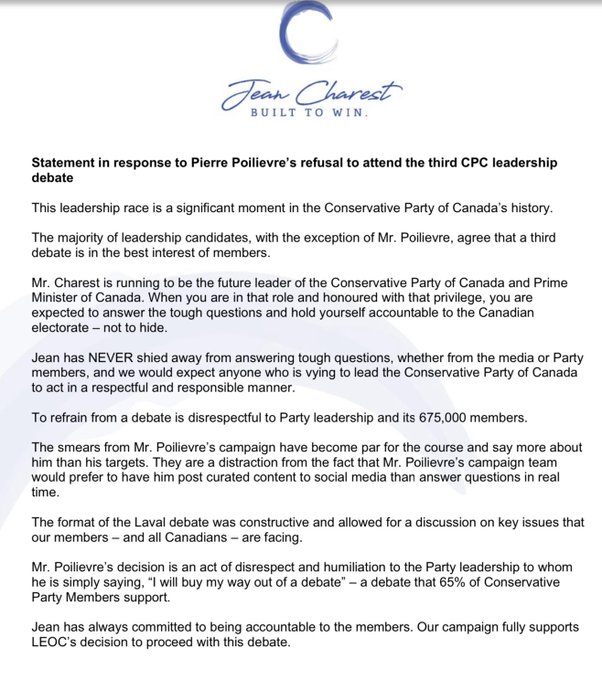 We all remember when Charest was repeatedly asked how much he was paid by Communist-China controlled Huawei at the first debate.

He refused, despite multiple opportunities to state the figure.

As a result, we clearly know that Charest only wants another debate to distract from his struggling campaign, and to push new narratives.

“Charest wants another leadership debate because he knows his campaign is in peril. He’s changed his tune around the Convoy and now wants to inject that messaging. True Liberal tactic. It’s a lie and a desperate attempt to salvage his leadership bid.”

Charest wants another leadership debate because he knows his campaign is in peril. He's changed his tune around the Convoy and now wants to inject that messaging. True Liberal tactic. It's a lie and a desperate attempt to salvage his leadership bid.

With all of this in mind, we must keep our focus on what is happening.

The failed establishment is desperate to ensure that there is no real change from Trudeau’s statist, big government policies, and they see Charest as their best chance to stop the CPC from actually putting forth conservative, centre-right ideas.

Thus, they’ll do everything they can to take down the Poilievre campaign, and distract from how divisive Huawei Charest is among so many Canadian Conservatives.

If you want to help stand up against the dishonest narratives of the establishment media, you can make a contribution to support my work through PayPal, or directly through Stripe below.