While much of the media does everything possible to try and make the CPC leadership race appear close, all the evidence points towards Pierre Poilievre continuing to dominate.

In response to the CPC releasing fundraising numbers showing Poilievre raised over $4 million in Q2, the Poilievre campaign stated that those numbers were in fact understating things:

“Thought the published numbers were great?

Well, they underreport our donation total by 1.3 million and our total number of donors by 8000.

Thought the published numbers were great?

Well, they underreport our donation total by 1.3 million and our total number of donors by 8000.

615k in one single day. It’s a movement, and it’s unstoppable. #cdnpoli https://t.co/8TKbPjk5oj

The full statement can be read below: 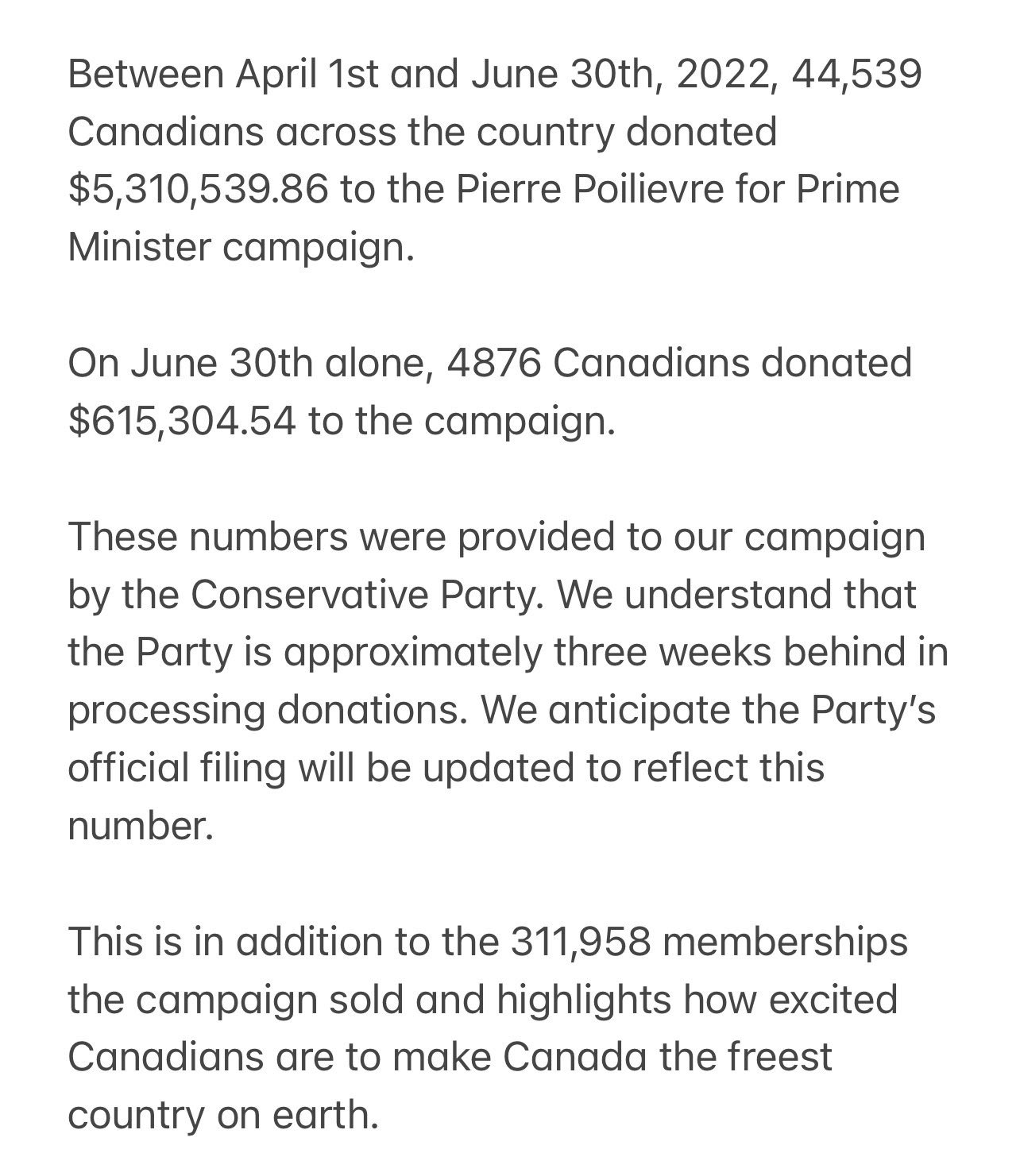 Here’s where it gets interesting:

The Poilievre campaign outraised both the Liberal Party and Jean Charest combined.

So, the Poilievre campaign outraised both of them.

Of course, a donation to the Liberals and the Charest campaign may be redundant, but it’s still quite a stunning accomplishment to outraise both of them given how much Charest & the Liberals have the media on their side.

Disrespecting the voices of Canadian Conservatives

Why is it that the evidence continues to demolish the narratives put out by Charest & the establishment press?

Because both have a fundamental disrespect for the voices of Canadian Conservatives, and are thus repeatedly shocked when reality intervenes.

It has been clear from the beginning that most Canadian Conservatives were opposed to Trudeau’s draconian lockdowns/mandates, opposed the rampant overspending & money printing by the Liberals/Bank of Canada, are tired of the biased media being given our tax dollars, and are completely opposed to Trudeau’s attack on free speech.

Time and time again Pierre Poilievre has taken positions that the majority of Conservatives support, and he has communicated those positions effectively. Thus, he is dominating the CPC leadership race.

There is nothing surprising or complicated about it: Poilievre is representing Conservative Canadians, while Charest is not.

Yet, the Charest campaign and the media have a fundamental disrespect towards Canadian Conservatives, and see their voices as somehow illegitimate.

So, they ‘offer’ Conservatives a Trudeau-style worldview while giving it a new coat of paint, expecting this to fool people.

Canadians are demanding real and lasting change in this country, the kind of change that isn’t about just switching a party label but is about completely rejecting the failed ideology of the Trudeau Liberals.

The fact that Poilievre has such overwhelming support in terms of donors and donations demonstrates how people have seen through the false narratives of Charest & the Liberal media, and are supporting those who have the toughness and strength to stand up for the truth.