Modern Architecture is almost always terrible compared to the Classical & Gothic styles. We should build aesthetically pleasing structures instead of littering our cities with eyesores.

Claiming that seemingly disconnected things are connected is the easiest way to be labelled a ‘conspiracy theorist’ or even ‘crazy.’

And yet, we can’t help but notice how many things are happening all at once.

Our society is becoming uglier, in the aesthetics of our buildings, our discourse, and our politics.

People are less physically and mentally healthy, personal responsibility is denigrated, and dependence on the government continues to grow.

Our spending and debt is out of control, as any sense of restraint is frowned upon. Many seem to feel they can have wealth without effort and prosperity without production.

Beauty and success are no longer revered, but are instead attacked, as if someone could only be wealthy by having stolen it from others. Note of course, how that never gets applied to politicians or those who solely make their money by leveraging government connections, but only gets applied to entrepreneurs who actually go out into the market and provide products and services people willingly pay for.

Do we no longer value beauty?

Ask yourself this question:

When was the last time you saw beauty venerated, promoted as something that we should all strive towards?

We live in a world where even an ad showing an attractive women in a bikini is considered ‘body-shaming,’ while magazine covers feature individuals who are objectively obese and unhealthy – yet claim otherwise. 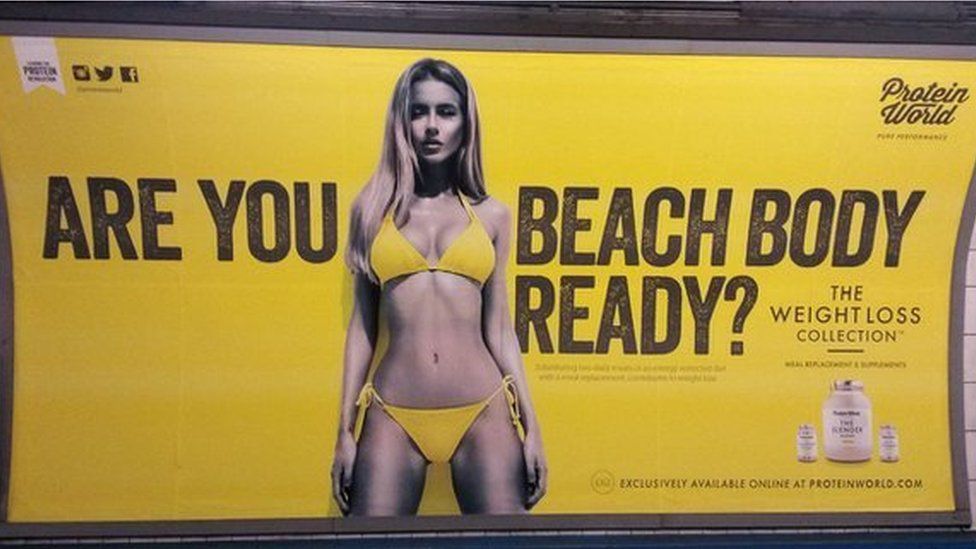 The advertising watchdog received 378 complaints in 2015 about a weight-loss advert that asked customers if they were “beach body ready?”

Mr Khan has now asked TfL to set up its own advertising steering group.”

Yet, the photo below shows a woman who is objectively overweight and far more at risk of health complications than the woman above: This is a trend with Cosmopolitan covers it would seem, and a trend that is getting more deeply ingrained in our society: 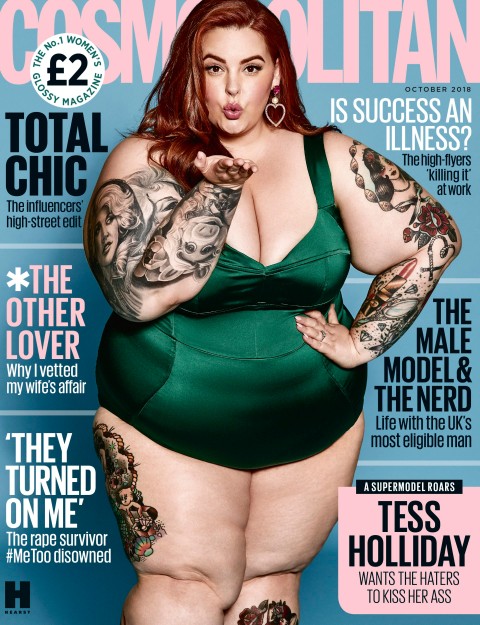 That photo would be called ‘body-positivity,’ while the previous photo would is supposedly ‘body-shaming.’

Doesn’t that seem a little backwards?

Again, this is not about attacking individuals who are overweight, nor is it about saying everyone has to look a certain way.

But if we are reaching a point where we pretend it’s healthy to be overweight, while claiming that showing very healthy people is ‘shaming’ others, then we are losing any connection reality or to the aspiration to approve.

And many of our ‘leaders’ have already decisively lost that connection to reality:

“At some level, you have to wonder if the restrictions on outdoor activities and outdoor fitness classes have anything to do with politicians – many of whom seem ‘exercise averse’ – resenting those who have youthful vitality and energy.”

Societies and cultures from around the world embrace heroic narratives.

From sculptures depicting the idealized human form, to architecture of immense beauty, the desire to chase an ideal – even when that ideal may be impossible to reach – is an essential impetus for any healthy civilization.

Even in our increasingly unaesthetic world, the desire for beauty and heroic narratives is alive, with superhero movies depicting idealized men and women attaining superhuman feats.

Yet, nearly everywhere else, this desire to become something greater is being suppressed, replaced with a ‘nice’ yet deeply dangerous ‘ethic’ of ‘why try to be great, just go along to get along.’

What does this have to do with buildings?

You may now be wondering, “Spencer, what does any of this have to do with the title of this article?”

Well, here it is.

The buildings a society creates are deeply representative of that society.

They are a lasting legacy.

They are what people spend much of their lives within, and attitudes are shaped by our surroundings.

For a building to exist there must be a need for it, resources must be gathered, an architect must be chosen, an design must be created, and builders must construct.

Buildings don’t happen accidently, and the aesthetic of our buildings speaks to who we are.

And right now, that aesthetic isn’t saying anything good:

“Imagine a building designed by an award-winning local architect. More than half a century old, it’s solidly built and beautifully detailed, wrapped in granite accented with brass. Now imagine sticking a 44-storey stack of condos – clumsily designed, awkwardly detailed – on top of that.”

“A terrible idea, right? Yet this is exactly what’s at stake with a new development application for 250 University Avenue, a building constructed for the Bank of Canada in 1958. The former bank building, prominent on University Avenue, might have escaped your attention. Yet it’s an important example of the way Canada slowly and cautiously went modern, the sort of building that we need to save until we learn to cherish it.” 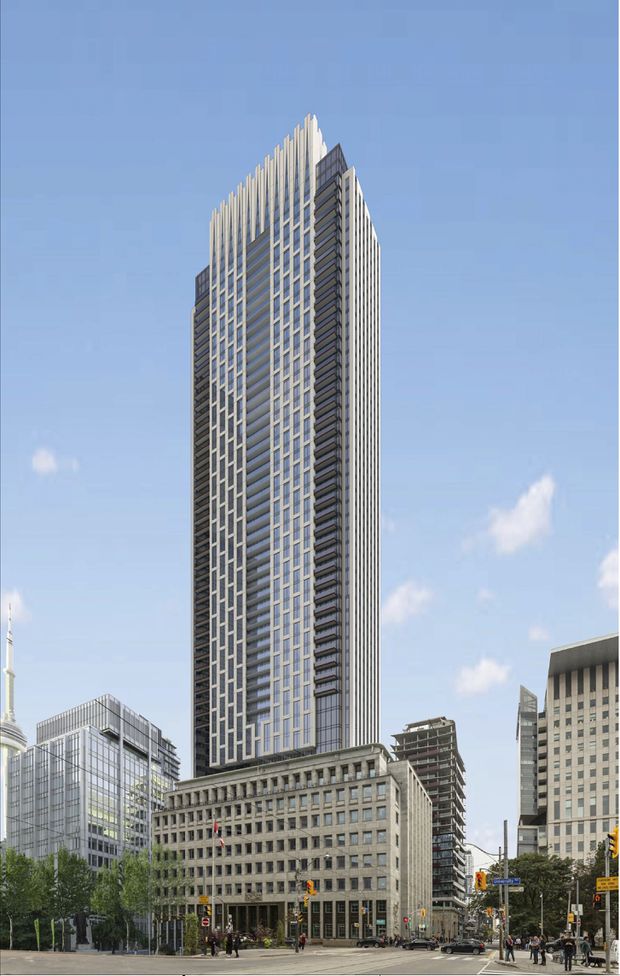 In a C2C Journal article, the Oberto Oberti discusses “how architecture lost its way in the modern world”.

Discussing Vancouver, Oberto Oberti writes, “From a distance, the impression is that one is beholding among the world’s loveliest cities. But how much of this is thanks to the buildings themselves? How much is due to the spectacular natural setting? Part of the professional architect in me – a big part – worries that Vancouver’s scenic splendour is standing in for a mediocre or even disturbing 21st century architectural jumble. I wonder if I’m being too harsh towards our built environment, but then I see ample evidence, in Vancouver and in cities across Canada and around the world, that I’m not. A balanced view suggests we live in a world that has achieved structures of stunning beauty, greater successes and wider prosperity than any previous civilization, but that we also have problems and dangers.

These reflections were prompted in part by the controversy over the Trump Administration’s surprise announcement that it may soon mandate that a traditional “classical architectural style” be used for new U.S. federal buildings rather than the currently popular “Brutalist” or “Deconstructivist” styles. The proposed Executive Order was quickly subsumed in the Covid-19 pandemic. But it briefly highlighted a debate that has never died since the Industrial and political revolutions of the 1800s ended the Romantic period of Western art, architecture and design. The Romantics cultivated dreams of an ideal past and a desire to recreate physical environments of past periods and cultures. That impulse appeared to have been placed in the cultural graveyard by the Modernists, including the Bauhaus school, Le Corbusier and many others. But the nostalgia for an ideal past never dies completely.”

In the article are photos of two buildings, contrasting the classical style with the modernist ‘brutalist’ style, which speak for themselves:

Of course, you can almost surely see examples of this wherever you live.

The most beautiful buildings are built in the Classical Greek/Roman or Classical Gothic styles, while everything ‘modernist’ is generally far worse, and often downright hideous.

In large part, this is because the classical styles were deeply based on mathematical proportion that is satisfying to the eye, and have stood the test of time, while the modernist approach is deeply anti-human.

As Nikos Salingaros – a professor of Mathematics and Urban theory says the following about “Architectural Myopia”:

“Michael Mehaffy and I coined this term to describe the curious (and alarming) phenomenon whereby someone who has gone through architecture school can look at a horrid, inhuman structure, and declare it to be great architecture. Such persons literally cannot see what is right in front of them. The corollary is also frightening: those same people look at older historical and vernacular structures and totally miss their intense degree of embedded life and humanity. To such people, “old” means useless, shameful, and is marked for elimination.

Architectural Education ever since the Bauhaus, and continuing to the present day without interruption, teaches students to interpret built forms according to very peculiar abstract criteria, and not through their own biologically-evolved senses and cognitive intelligence. This is radical training in sensory denial: desensitizing people so that their interpretation of the world can be defined by others with an agenda. But because of this architectural myopia, a large group of people happily accepts the conditioning and doesn’t realize what’s going on. And they don’t understand why others disagree drastically with them.”

And of course, we must mention the impending desecration of the Chateau Laurier hotel:

Here it is – without any addition: 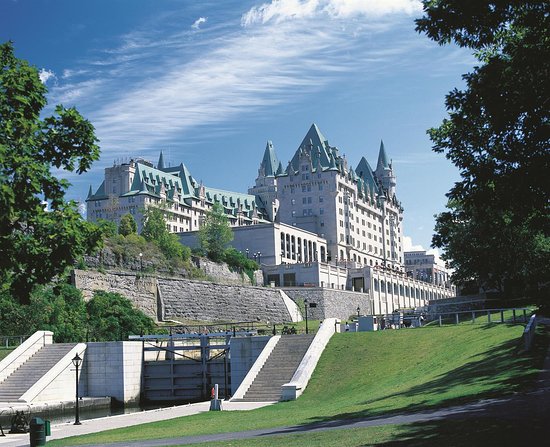 And here’s the approved addition design:

It’s worse, in every possible way.

Looking at the original, beautiful building, the question is why they didn’t just make the addition look like the rest of it.

But no, that would be too ‘traditional,’ so they had to add a ‘modern’ twist.

The problem is that the classical styles are simply better looking and more aesthetic in every possible way.

So, to deviate from them means making something uglier.

And that’s exactly what the addition to the Chateau Laurier has done.

People still have an instinct for beauty

Even in a world that seems increasingly ugly, people still have a deeply ingrained instinct and respect for beauty.

“Corinthian columns and Carrara marble do more for Americans than concrete and steel, according to a new poll on America’s architectural tastes. And it’s not even close.

The survey, conducted by The Harris Poll, asked more than 2,000 Americans to consider seven pairs of images, most of them side-by-side photographs of various federal buildings — one classical in design, the other more modern-looking. “Which of these two buildings would you prefer for a U.S. courthouse or federal office building?” asked the survey, which was organized by the National Civic Art Society, a nonprofit that promotes classical approaches to architecture and urbanism.

The responses did not vary by demographic group: When asked to choose from the two images, Americans of every age, sex, race and class category pulled the lever for traditional designs by a nearly 3 to 1 margin. Overall, classical won out over modern by 72% to 28%.”

Our tax dollars shouldn’t be funding things that make our society uglier.

We should be enhancing beauty, and embracing the tradition of beautiful architectural aesthetics.

Canada needs legislation mandating all taxpayer-funded buildings can only be constructed in the neo-classical and neo-gothic styles, with modernist architecture banned.

On private property, people can build in modernist styles if they choose – after all, it’s their money. But on public land, and for taxpayer-funded projects, modernist architecture needs to banned and Classical/Gothic styles mandated.

At all levels of society, we must remember that beauty enhances our lives, gives us something to strive towards, and reminds us of the true potential that we all have within ourselves.

Rather than embracing mediocrity, let’s embrace achievement and aesthetics, and mandating a revival of classical & gothic architecture is a great place to start.