The more Canadians turn against the Trudeau Liberals, the more we should expect the quasi-state media to try and distort reality and distract from what is really happening.

Justin Trudeau is deeply unpopular in Canada, and that is especially true in Alberta.

At best, the Liberals are in the range of around 10-30% support in the province, likely closer to the lower end of that range.

If Justin Trudeau visited with a group of Albertans who are representative of public opinion, then he wouldn’t get the best reception.

Indeed, this is the reception he got in Sudbury, Ontario:

Woman yells at #Trudeau: "You're nothing but a communist pig. You're disgusting. You should resign!" pic.twitter.com/CCXi7Ef2PZ

It stands to reason then that in Alberta – where he is far less popular – he would receive a worse response.

So, what are we to make of the endless stream of headlines stating Trudeau was “mobbed by admirers” at a Stampede Breakfast?

Does Trudeau have some massive, untapped, previously unknown support in Alberta that we all weren’t aware of?

That’s what the media wants us to think.

Take a look at the Tweet below, showing the endless stream of media outlets using the same wording: 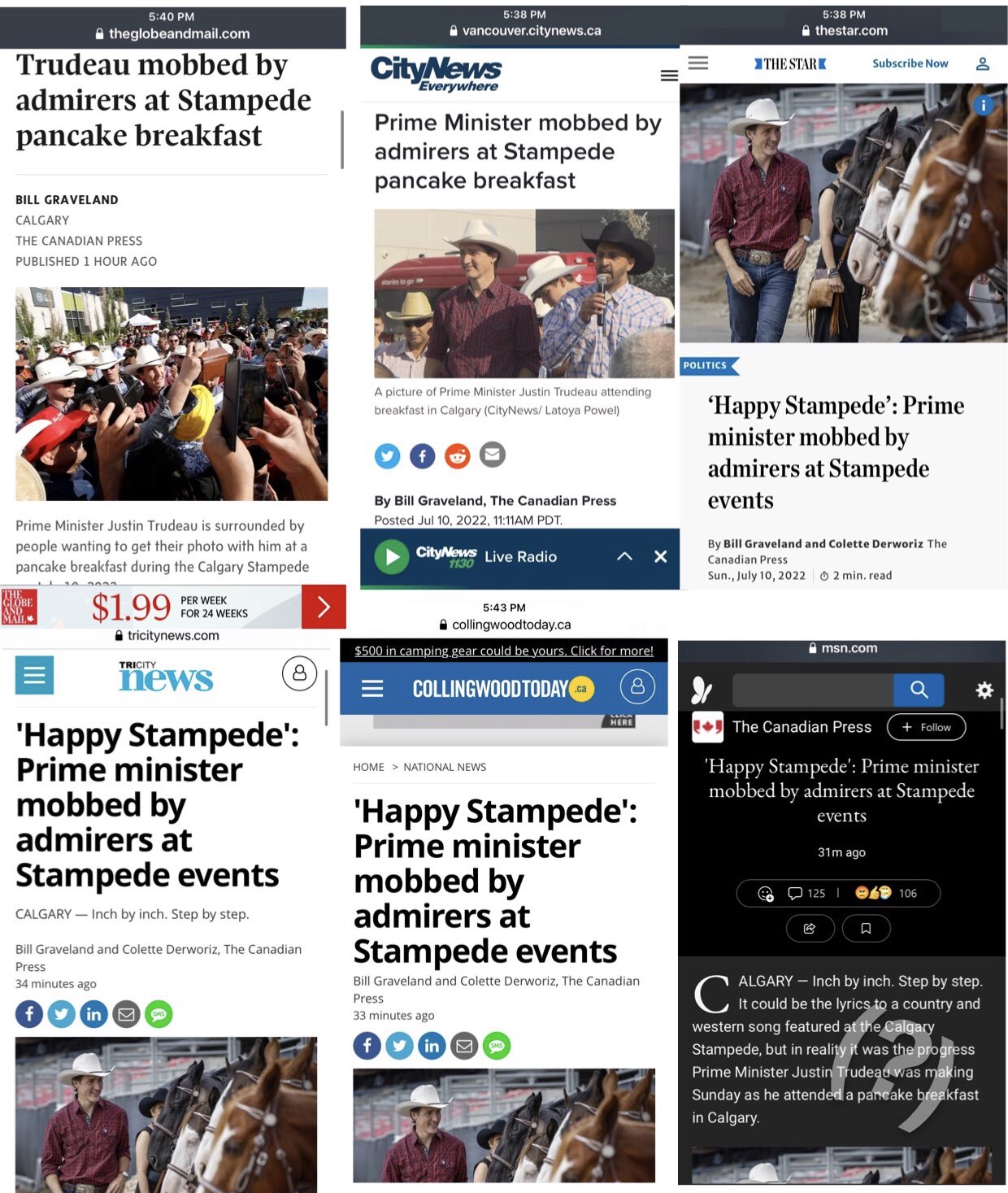 We see what the media wants us to think happened.

But what really happened?

“Trudeau at the Calgary Stampede

Is our media compromised?”

“Calgary Stampede heckling: “Trudeau you’re a traitor!” is yelled as Trudeau surrounds himself with a security detail who escorted the heckler away.

Turns out, Trudeau didn’t wade into a crowd of Stampede attendees. “Instead, he was at a Liberal fundraiser, a controlled, selected environment partisans:

So, the story by the Canadian Press organization (which has sometimes in the past provided decently objective coverage), seems much more like a government press release.

The real disturbing question here is why did all the other media outlets run with it?

Why further wreck their reputations?

“For decades @globeandmail was the peak of 🇨🇦 journalism. Integrity. Quality. Trusted.

How pathetic it is today. Regardless of one’s politics, I’m embarrassed for them and for 🇨🇦.

At the @calgarystampede no less.”

One seemingly deceptive propaganda piece isn’t a big deal, but nearly every establishment media outlet spreading it is a huge problem.

It demonstrates the immense extent to which the Trudeau Liberals have turned the media into state propaganda.

Further, it demonstrates that the media isn’t even interested in hiding this fact.

They are hiding behind the names of once-reputable institutions, while they hollow out those institutions and replace the innards with what amounts to Trudeau PMO press releases.

We face the undeniable reality that what we once thought of as the “Canadian media” is now the Trudeau-Liberal media.

Only by heightening our awareness and strengthening our resolve can we wade through the muck of all the state propaganda and continue to be advocates for the truth.