How can institutions complain about a lack of public trust when they repeatedly show themselves to be dishonest?

The Bank of Canada is facing continued criticism following their attempt to mislead – or gaslight – Canadians when it comes to money printing.

In a Twitter thread, the Bank of Canada tried to claim they didn’t ‘print cash’ to finance massive government deficits.

They made that claim using a very convenient and narrow definition of what people consider ‘money printing,’ apparently assuming people would think that the absence of physical cash creation somehow got them off the hook.

But rather than end up convincing people, the BoC instead provoked a backlash, as their attempt to manipulate people was easy to see through.

Among those to criticize the Bank of Canada was @FedGuy12, a former senior trader at the US Federal Reserve:

“This is straight up misinformation. QE increases settlement balances, but also bank deposits (which is what most people think of as money, not just currency).

The settlement balances are an asset of a bank, and it is balanced by a deposit liability.”

This is straight up misinformation. QE increases settlement balances, but also bank deposits (which is what most people think of as money, not just currency).

The settlement balances are an asset of a bank, and it is balanced by a deposit liability. https://t.co/yeIzLAOmcM

“Here’s the jump in bank deposits from bank of Canada’s QE. Obviously that is someone’s “money””

Here's the jump in bank deposits from bank of Canada's QE. Obviously that is someone's "money" pic.twitter.com/Su4Iz4O3LE

Here is a full-size copy of the chart: 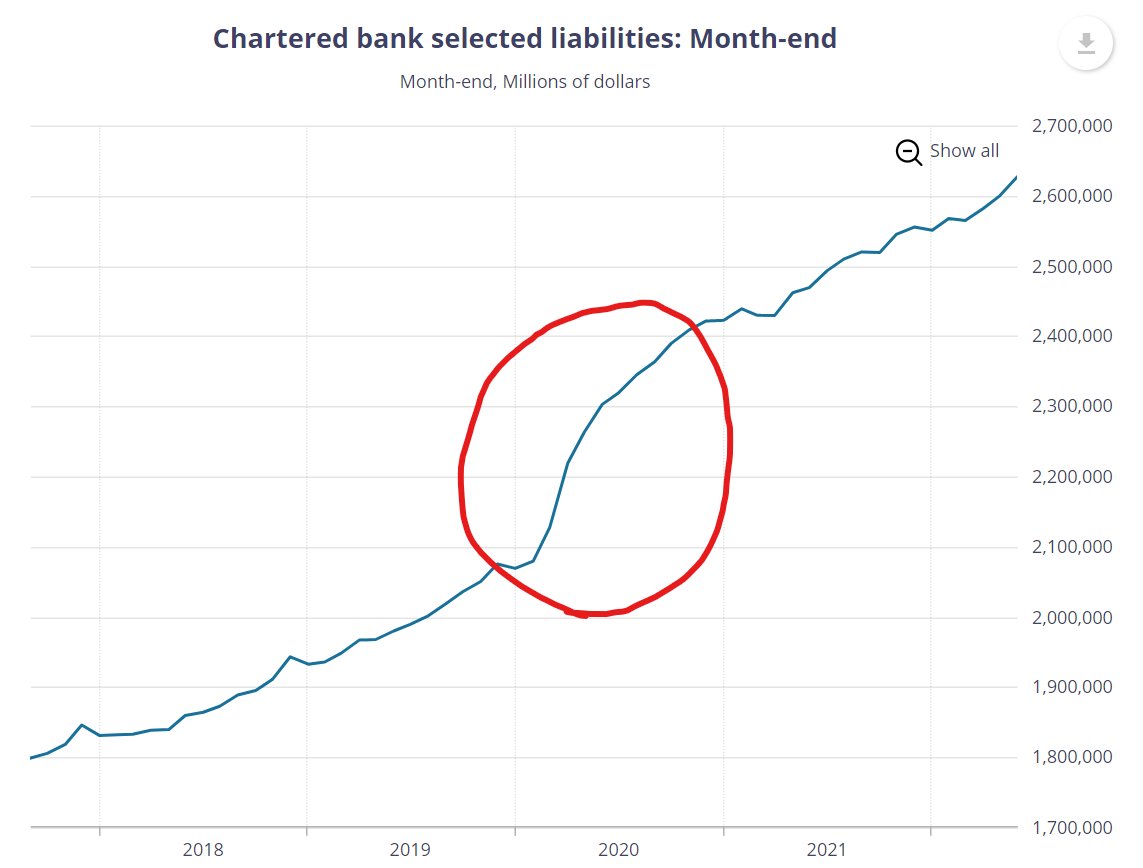 Why does the Bank of Canada think they’ll get away with this unchallenged?

As we’ve seen with other institutions in Canada, the Bank of Canada appears to believe itself completely above reproach.

It’s almost a magical type of thinking, in which they expect to be believed simply because they are the Bank of Canada.

But that’s not how the world works anymore.

When an institution puts out a message, everyone is free to analyze it and take it apart.

The Bank of Canada is not immune from that scrutiny.

Further, they have already damaged their credibility by repeatedly getting it wrong on inflation, as well as their decision to print money (regardless of what they claim) in order to finance the massive budget deficits racked up by the Trudeau government.

Thus, they have lost the ability to expect people to trust them, and the more they attempt to mislead and misinform Canadians the more people will see the BoC as unworthy of trust.