Provinces with millions of people being thrown into crisis with hundreds of people in the ICU shows how inadequate our system – and approach to health overall – has become. A combination of building a more physically resilient population, and bringing more private sector innovation into the healthcare system is essential.

There are about 1.4 million people in Manitoba.

And yet, we are told that the system is ‘collapsing’ and ‘overwhelmed.’

19 COVID patients have been transferred to Ontario ICUs.

And other treatments are being postponed, leading to deaths.

As this takes place, politicians are of course once again blaming the public, and threatening even more draconian restrictions.

And yet, rather than blaming the public, we should instead be asking why our healthcare system is so shockingly fragile.

Really think about this for a moment:

How does it make sense that a province of 1.4 million people doesn’t have the ICU capacity to handle 79 patients?

Especially after the government has had a full year – and has run massive budget deficits.

You would think that our supposedly ‘world-leading’ public healthcare system could handle this, right?

We’ve seen this across the country, with healthcare systems in provinces like Ontario (with a population greater than the entire nation of Greece), warning of collapse when there were hundreds of people in the ICUs.

In short, our healthcare system (which is so often praised by politicians and many members of the public), has fallen woefully short and shown itself to be stunningly fragile.

Consider this chart from the OECD on ICU capacity: 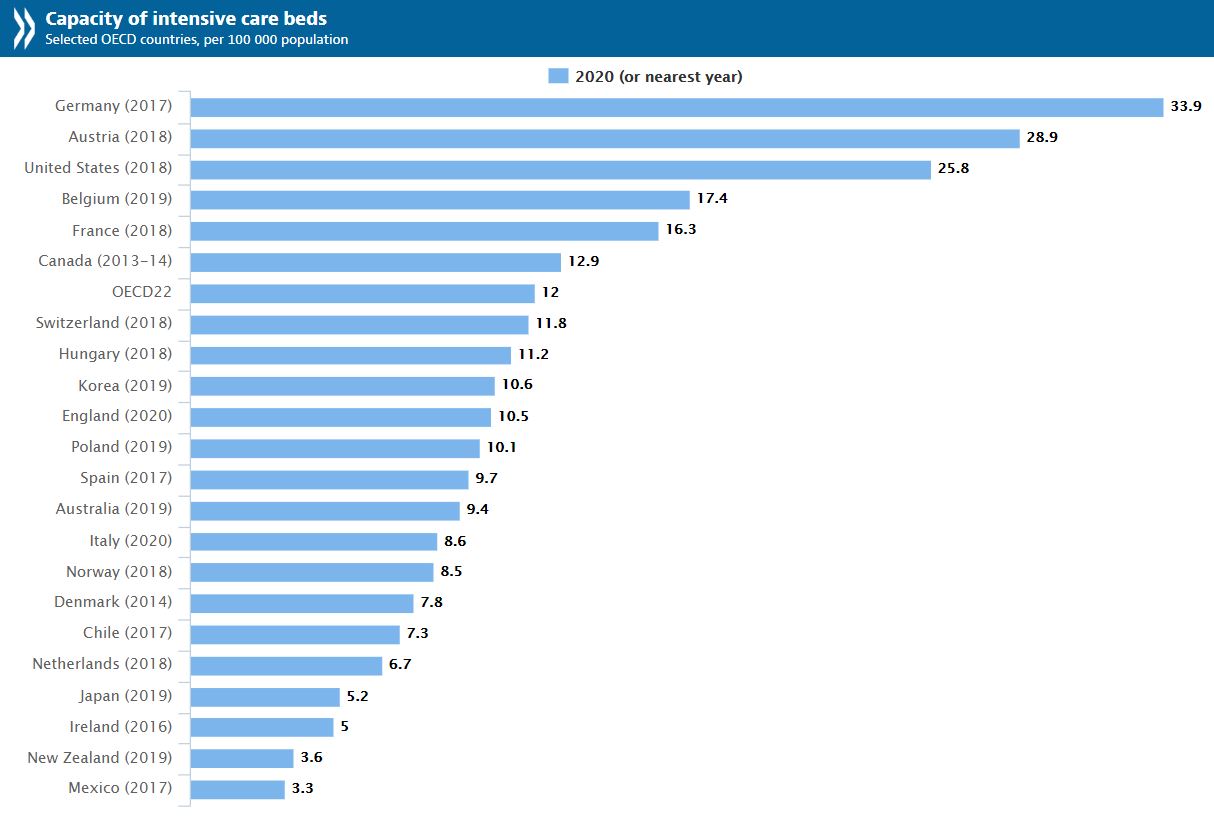 Take a look at the Canada vs US number (since so many like to compare us to America).

Canada’s ICU capacity is dramatically worse than the United States, and that can be seen by the fact that even smaller per capita case counts have led to warnings of collapse in Canada far more rapidly than in the United States.

Alberta Premier Jason Kenney even tried making this point when discussing lockdowns, claiming that American states like Florida and Texas could open up because they have far more ICU capacity.

Of course, Kenney neglected to mention that focusing on personal fitness and protecting vulnerable seniors – rather than locking everyone down – is a smarter option, and also neglected to confront the fact that since he’s the Premier of Alberta, the lack of ICU capacity is an issue for him to address and take responsibility for.

But back to the Canada-US comparison.

Where are all the gloating voices about how great our system is compared to the US?

Where is all the anti-America rhetoric?

Where is the denunciation of private healthcare?

The fact is, fully public systems like Canada’s and the UK NHS have struggled heavily during the pandemic.

By contrast, nations with a hybrid system, like Germany have fared much better.

In Germany, the majority of people have public health insurance, and care is guaranteed regardless of income.

However, individuals can opt to have private insurance instead:

“Germany’s universal health-care system actually consists of two insurance systems: the Statutory Health Insurance [SHI] system for most Germans and the optional Private Health Insurance [PHI] system, which primarily serves high-income earners and the self-employed. Both systems are funded by health insurance premiums and both are operated by multiple privately owned and operated insurance companies.

About 86 per cent of the population participates in the SHI system, which consists of about 145 competing, independent, not-for-profit “sickness funds.” Premium payments are based on a fixed percentage of wages (split between employers and employees) while unemployed spouses and dependents are covered without additional cost. These premium payments are pooled with tax contributions, and are redistributed among insurers by governments to account for differences in the risk-profile (age, pre-existing medical conditions, and so on) of their respective populations. Patients are generally expected to share the cost of their prescribed drugs, hospital stays, and prescribed medical aids through small copayments (€5–€10), although medical services rendered to children are exempt and an annual income-based ceiling applies to all adults.

About 11 per cent of the German population participates in the PHI system, which consists of 24 for-profit and 19 not-for-profit insurance companies. Such insurance is optional for those earning more than €50,850 and the self-employed, however family members are not automatically covered and individuals who choose leave the SHI system cannot opt back in (though regulated options offering similar coverage to the SHI system at lower cost are available).”

Germany, and other countries with systems that combine universal coverage with some private delivery and private insurance, vastly outperform Canada, as our nation spends more and gets less, as noted by the Fraser Institute:

The study compares 28 universal health-care systems in developed countries, spotlighting several key areas including cost, availability and use of resources, access to care, clinical performance and quality, and the health of Canadians.

In 2018, the latest year of comparable data, Canada’s health-care spending as a share of GDP (11.3 per cent) ranked second highest (after adjusting for population age) behind only Switzerland.

But despite Canada’s high level of spending, availability and access to medical resources is generally worse than in comparable countries (its performance in terms of utilization and quality is mixed).

“Canada’s health-care system continues to struggle with a lack of critical resources and long wait times for treatment, despite our high levels of spending,” Barua said.

“To improve Canada’s health-care system, policymakers should learn from other successful universal health-care countries, for the benefit of Canadians and their families.”

Clearly, Canada could benefit from maintaining universal health coverage, while embracing a larger role for the private delivery of healthcare.

Many don’t seem to realize that Canada’s system would be even worse were it not for the many Canadians who seek healthcare in the United States, which relieves pressure on our system.

That is also an indictment of our system, as it can’t provide many of our Citizens with the care they need in a timely or quality fashion.

Our healthcare system has been weak for a long-time

Crises don’t so much create new problems, rather they expose the vulnerabilities posed by old problems.

Canada’s healthcare system has been weak for a long-time, in large part because of the irrational aversion some people have to any mention of the word ‘private’ in relation to healthcare.

Many seem to assume that there are only two alternatives:

The Canadian public system, or the American private system, failing to recognize that much of Europe mixes both and gets better outcomes for lower costs.

This is part of the damage our obsession with America creates, as we miss out on other ways of thinking and other alternatives that could benefit our country and our people.

A new approach to health (AKA a return to common-sense)

Beyond embracing more of a role for the private sector while maintaining universal coverage, we also need a shift in how we approach health itself.

Our society increasingly seems focused on a miraculous last-second save for people in dire circumstances, rather than a preventative approach.

When we look at declining levels of physical fitness, rising obesity among young people, and the mental health crisis (a crisis that was worsening even pre-lockdowns), we can see that our society itself is becoming less and less healthy.

This raises the burden on the healthcare system even further.

A change in mindset is needed, with a goal of Canada being the healthiest country in the world as an aspiration to set our sights on.

We should be emphasizing physical fitness from an early age, as building healthy diet habits and strong athleticism among young people helps set in place habits that can last for a lifetime.

Further, physical health and mental health are closely linked, and a strong generation of young people will be able to further contribute to our economy, and most importantly can live more free and independent lives.

This past year has shown that Canada’s current approach to both health and healthcare are unsustainable, and for the sake of our future we must have the willingness to acknowledge this reality and take meaningful steps to change it.