A look at the numbers demonstrates how severe the damage has been.

One of the things we have long taken for granted is that life will be better for each successive generation.

Technological advancement and relative peace in our part of the world has made that possible, and it’s natural to assume that will keep on going.

Yet, there are some core principles that provide the foundation for that kind of material progress.

In order for prosperity to continue and broaden, a nation must be fiscally responsible, its people must be free, and its money must be sound.

When that ceases to be the case, a country can appear to be fine for a while, as it lives off the accumulated wealth of the past.

But that can only go on for so long.

The true cost of Trudeau’s policies

Take a look at the graphic below, from Kris Sims of the Canadian Taxpayers Federation:

As @kris_sims has pointed out, under Trudeau's "leadership," everything is becoming unaffordable. pic.twitter.com/IV8YIWUwsP 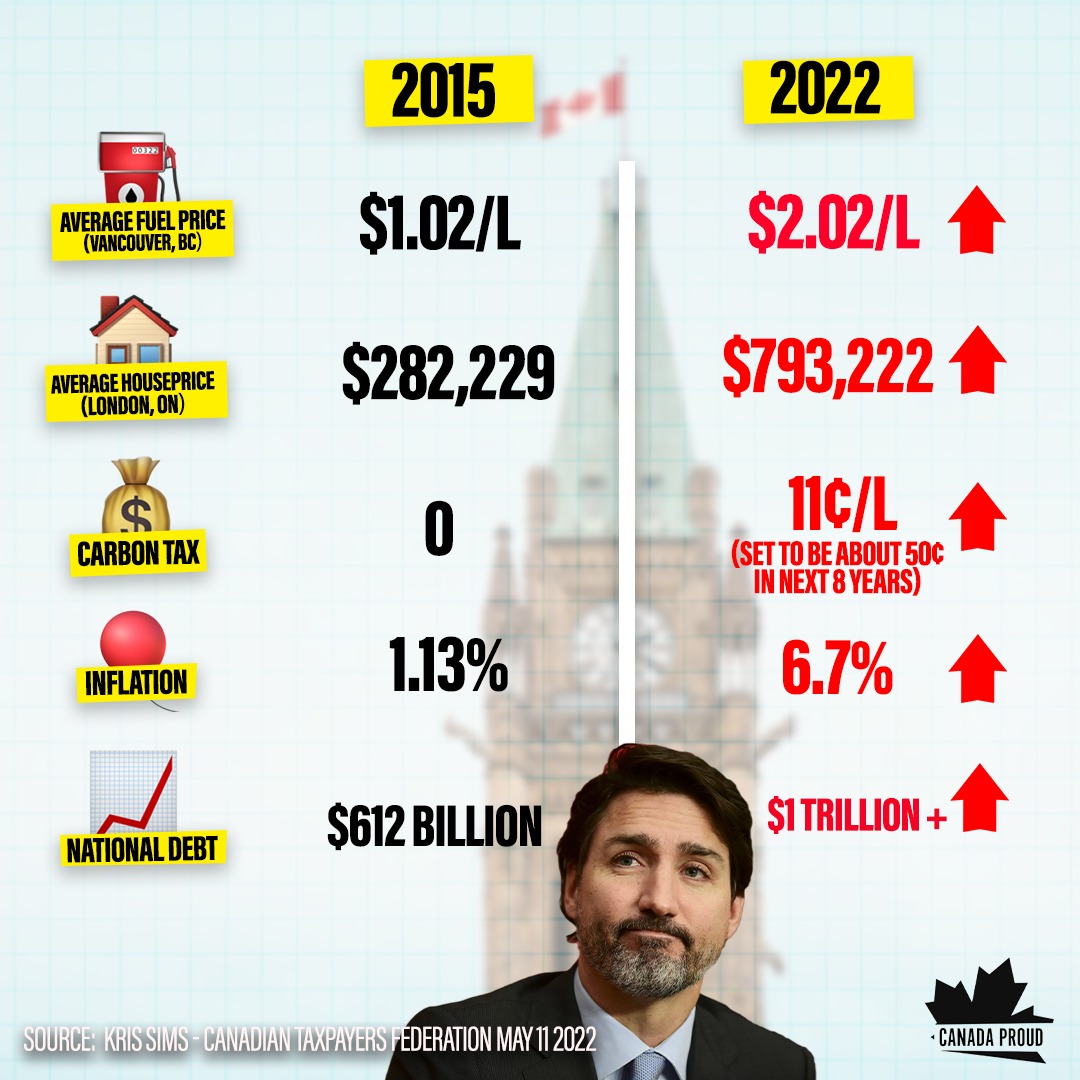 That is the true cost of Justin Trudeau’s policies.

Remember, he was handed a balanced budget and a stable economy when he took power.

He promised to run three ‘small’ deficits, and campaigned on lowering the cost-of-living.

One of Trudeau’s most effective ads in the 2015 campaign was when he walked up a ‘down’ escalator, visually demonstrating the idea of Canadians feeling like they were working harder and harder but not getting ahead.

Well now, many Canadians feel like they’re on a free-falling elevator, as the cost-of-living surges so rapidly that being stuck in place would be highly preferable.

By financing his deficits, the Bank of Canada has made it easier for Trudeau to spend more and more money, while passing the cost and the pain onto Canadians by debasing our currency.

“I mean the Bank of Canada has absorbed nearly 85% of all new Government debt issuance since 2019. Let’s not pretend they are not a political entity.”

I mean the Bank of Canada has absorbed nearly 85% of all new Government debt issuance since 2019. Let’s not pretend they are not a political entity. pic.twitter.com/fSldIM5caA

The federal government loves this, since it masks the true damage being done to the economy as people are likely to incorrectly blame inflation on the private sector than direct blame where it actually belongs – the government and Bank of Canada.

This is also why the establishment is so enraged by Poilievre’s criticism of the Bank of Canada, because he is educating more and more people about what is really going on in this country, and not allowing the elites to hide what they’ve done.

The Canadian Dream, the idea that we would continue moving towards a more prosperous future for ourselves and future generations, is being crushed by the inflationary big government policies of the Trudeau government and Bank of Canada.

Only by reversing those policies, returning to fiscal responsibility, emphasizing individual freedom, and embracing sound money will Canada be able to turn things around.

We need to stand up to the dishonest narratives of the establishment media. I am fighting for the truth, and if you value my work, you can make a contribution through PayPal, or directly through Stripe below.