As Canada continues to see a surge in crime, the corrupt political elites are attempting to shift blame away from the true culprits (criminal gangs), and instead falsely pin blame on law-abiding Canadian gun owners.

As a result, organizations like the Canadian Coalition for Firearm Rights are more important now than ever before, pushing back against the biased propaganda and defending law-abiding Canadian gun owners.

Now, the CCFR is seeking to have a real conversation on firearm ownership and public safety, and are inviting Dr. Najma Ahmed of Canadian Doctors for Protection from Guns to discuss the issue with Rod Giltaca of the CCFR.

It could be a rare opportunity to have an actual converstation, rather than the one-sided media biased fear-mongering and demonization of law-abiding gun owners.

Here’s what the CCFR said in a press release:

Admission: $20 at the door. Space is limited. ALL proceeds to local food bank.

Why: To politely and maturely discuss the most important questions concerning the relationship between private firearm ownership and public safety in Canada.

If Dr. Ahmed participates in this conversation, the CCFR will donate $10,000 to the Big Brothers and Sisters of Toronto and an additional $5,000 to a charity chosen together by Dr. Ahmed & Mr. Giltaca at the end of the evening.
Both Dr. Ahmed & Mr. Giltaca will commit to signing a photo release as the CCFR will film the event and upload it for viewing on the web. A high definition digital copy of the event will be provided to Dr. Ahmed upon request.

The CCFR will pay all expenses associated with the event.
For the donations to be awarded, both parties must act in a respectable and polite manner throughout the event and participate in the conversation in its entirety. Political talk will be kept to a minimum so the conversation can remain productive and on topic.

The moderator will begin the conversation by asking a question. The questions will be high level in scope as to provoke a discussion. For example, “is there evidence to support further regulation of firearms in Canada”? The first participant will have up to 3 minutes to form an answer. Then the other participant will have up to 3 minutes to provide a response. The conversation around this question will continue in this manner until such time as the participants agree to move on to the next question, or the moderator decides the current question has been satisfactorily explored.

Dr. Ahmed can accept this invitation in writing to [email protected] and must share her acceptance on the Doctors for Protection from Guns Twitter account to verify authenticity. Acceptance must be received by no later than January 10, 2020. No substitutions.

The rules are simple and will facilitate a productive conversation. 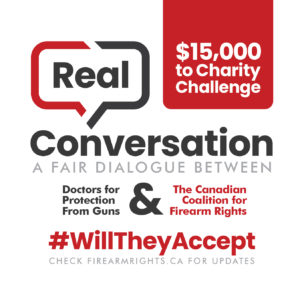 To help spread the word, share this article and visit the CCFR website at the link below: