Good news for all Canadians who want the next election to offer a real alternative.

As I wrote for the National Citizens Coalition before the announcement, Charest would have been disastrous for the Conservative Party, and would have deprived Canadians of a real choice in the upcoming election:

“A Charest-Conservative Party would be no real choice at all. It would be barely distinguishable from a Trudeau-Liberal Party.

It would also be devastating for the Conservative Party itself. The Conservative base is smart and politically knowledgeable. They won’t be fooled by Charest. For every vote Charest may gain from ‘centrist’ voters, he’ll lose two from core Conservatives. And he’ll make the rise of a Western separatist party, or a surge in support for the PPC a near-certainty.”

Now, Charest has decided not to run.

He issued a statement explaining his reasons:

FULL statement from Jean Charest on not running for the #CPC leadership.

Says, "Canada needs a national political alternative striving to represent each and every region of our country," adds party needs a "credible and ambitious plan" on the environment. 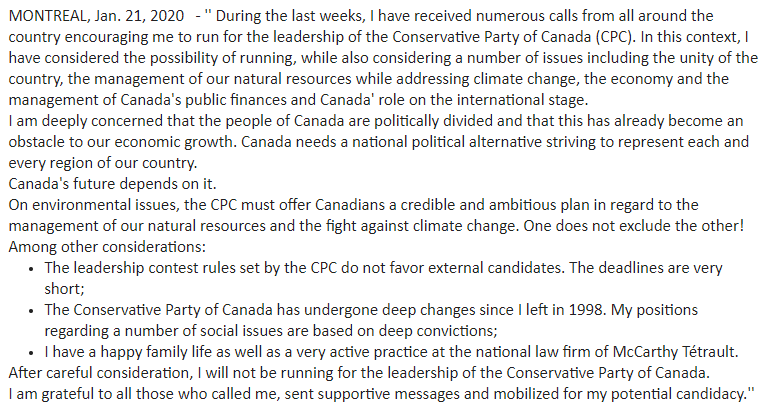