At each moment when your rights are reduced and government power expands, the establishment wants you to ignore the context and direction of events.

With the Bloc planning to side with the Liberals on Bill C-10 (shutting down debate and pushing the legislation through), it appears likely that Bill C-10 will pass:

“The Bloc Québécois is offering to work with the Liberals to shut down debate on Bill C-10, the government’s controversial plan to bring streaming giants such as Netflix under Canada’s existing broadcasting rules, in an effort to pass the legislation into law before the summer recess.

Note how the Bloc, Liberals, and NDP are in lockstep:

Bloc Leader Yves-François Blanchet announced the plan Sunday evening on the popular French-language talk show Tout le monde en parle, during a panel discussion with Canadian Heritage Minister Steven Guilbeault and NDP Leader Jagmeet Singh. The three parties are broadly supportive of the bill and much of the discussion was spent criticizing the Conservative Party for opposing the bill over free-speech concerns.

“It’s exceptional, but if the government agrees, we are prepared to launch a process of time allocation and rapid adoption so that Quebec’s cultural sector and the Canadian cultural sector can have this bill adopted before the end of the session,” Mr. Blanchet said.”

Indeed, Bill C-10 is popular in Quebec, with the governing CAQ and the opposition parties expressing unanimous support for it.

In the rest of Canada, it is far less popular, and even some Liberal MPs had expressed concerns.

But now, those concerns, and the many concerns of Canadians across the political spectrum are being ignored, as the Liberals push forward with Bill C-10.

A quick aside: It’s almost sad how much Jagmeet Singh keeps trying to win votes in Quebec, considering how that’s not going to work out for him, while it loses him votes in former NDP strongholds. I say almost, because the real tragedy is how Jagmeet Singh has become nothing more than an enabler for Trudeau and the Liberals.

Anyway, back to the main issue.

The reality is that Canada has steadily moved in a more authoritarian direction over the past half-decade, with the last year dramatically ramping up the process.

And while people can point to dramatic pandemic-related restrictions across much of the world, Canada’s lockdowns have been far stricter than in many countries, and enforced with more ruthless zeal than we often see elsewhere.

Indeed, while many other parts of the world are opening up, Canada remains more locked-down than ever. (Unless of course you are a non-citizen flying into the country).

Furthermore, even ‘conservative’ politicians have embraced a huge expansion of state power, infringing on rights at a level that has shocked many of their supporters.

There has also been a disturbing flip, with leaders like Jason Kenney (who once said the Alberta approach would be through education, not enforcement), shifting towards a relentless assertion of state power over individual rights.

Consider that, and then take a look at what the UCP government is doing now:

“UCP plans to use drones to spy on long weekend campers”

“I can’t quite believe that I’m writing this.

We’ve just learned that the Alberta government is planning to spy on Albertans using drones.

Here is the request for proposals from companies to operate this program, taken directly from the government’s own website:” 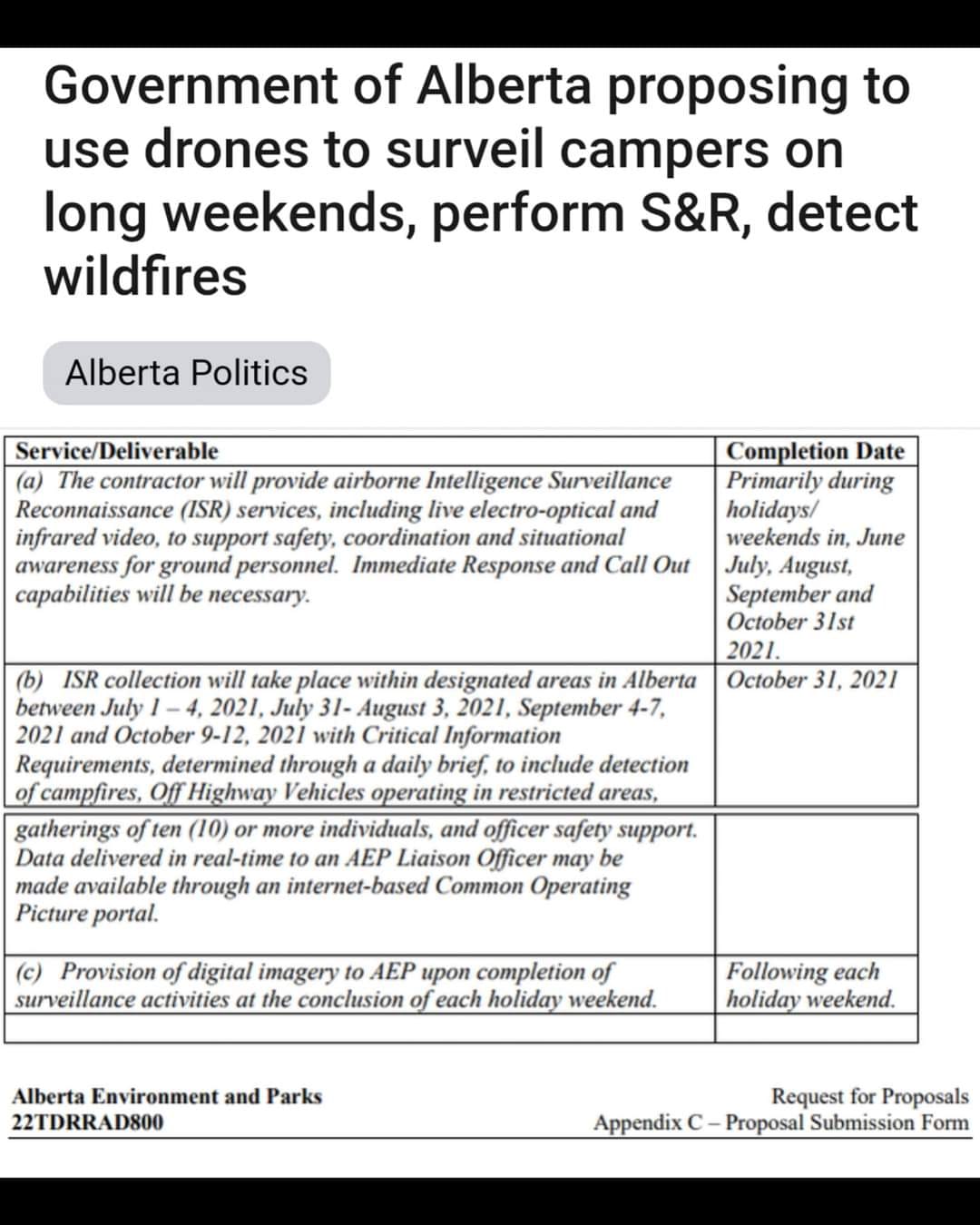 “You can read for yourself, the government is looking for companies who can provide live video footage, primarily (but not exclusively!) on holiday weekends in June, July, August, September, and October this year.

Amongst the things they will be looking for: “gatherings of ten or more individuals”.”

After people caught on and a backlash against this authoritarian move ensued, the government removed the proposal:

“That RFP on using drones for to do surveilliance on public lands has just been cancelled.

It was only issued on Friday.”

That RFP on using drones for to do surveilliance on public lands has just been cancelled.

It was only issued on Friday. #ableg

But again, the issue is that they even thought about it.

A so-called ‘conservative’ government decided to use drones to spy on people outside to see if ‘too many’ had gathered together.

You would expect that in Communist China, not ‘free’ Alberta.

All trends moving the same way

So, with authoritarian socialism rising in the provinces, Bill C-10 at the federal level shows the trends are all moving in the same direction:

Disturbingly, the more the government amasses unaccountable power, the more they seek to stop us from criticizing them.

Make no mistake, Bill C-10 will be used to ratchet down the ‘acceptable’ terms of discussion and debate in Canada, and it sets the stage for upcoming Liberal legislation on ‘hate speech,’ that will further be used to expand government power and limit free expression.

As noted by Pierre Poilievre in Parliament, the Liberals are in effect creating a ‘Speech Czar’ that will determine what we can and can’t see online:

“Who will be the speech czar that will decide who sees what under Trudeau’s censorship bill c-10?

Whoever he is, let’s make sure he never gets that power.”

And, after a year in which many politicians at all levels have complained about being criticized online (as if they should expect to have the power to wipe out tens of thousands of small businesses, destroy jobs, restrict freedoms, keep getting their full salary, and be exempt from criticism), how many are probably cheering for the end of free expression online?

And, with the Bloc, NDP, and Liberals seemingly working together to shut down debate (quite ironic), and push through Bill C-10 to restrict free expression and massively expand state power, Canada takes another step towards authoritarian socialism.

While some may balk at the use of the word ‘socialism,’ it is indeed quite accurate, especially when you consider the push for a Universal Basic Income, a massive expansion of government spending, a Bank of Canada that is devaluing our currency and enabling the rapid accumulation of debt, and the growing number of state-restrictions on economic activity.

We are moving towards a future in which the state is the centre of everything, and where only those who placate the whims of all-powerful politicians have any chance of success.

We must reverse this anti-freedom trend, or the soul of Canada will be irrevocably lost.