And it’s an ugly picture.

In the past year and a half, we’ve seen politicians deploy the police in force to shut down religious gatherings and restaurants.

Adam Skelly, who was trying to keep his BBQ place open, was confronted with dozens of cops and politicians who zealously cast him in a negative light, putting on a show of force that was grossly disproportionate to the situation.

Pastor Artur Pawlowski was arrested in Calgary, in the middle of the road:

And there was much more of this, as authorities acted quite aggressively on the orders of the politicians.

Yet, while this zealous enforcement took place in one context, it is completely absent in another.

Indeed, Churches are being burned down with impunity across the country, and in Winnipeg, statues were torn down on Canada Day, including a statue in front of the legislature – where there is always a strong police presence.

Crowds chanted 'no pride in genocide' as the statue was brought down and then kicked.

“NEW: Statues of Queen Victoria and Queen Elizabeth II have been toppled during protests in Canada”

Indeed, as you can see below, there was a large police presence at the site:

“Massive police presence yesterday when the mob pulled down the statue of Queen Victoria. They were there to arrest the one counter-protester, of course. They tasered him.”

“Police watch as criminals tear down the statue of our reigning monarch, Queen Elizabeth II in Manitoba yesterday. Where are our political leaders?”

Police watch as criminals tear down the statue of our reigning monarch, Queen Elizabeth II in Manitoba yesterday. Where are our political leaders?#cdnpoli pic.twitter.com/dPzjqS7MYS

As we’ve seen, there is an obvious double-standard going on here.

That double-standard has been evident for some time now, as we saw the politicians and health officials make an ‘exception’ for BLM protests for political reasons, after telling everyone they were ‘following the science.’

Now, it is abundantly clear that enforcement of the law is based on how closely aligned a select group is with those in power, or how gutless those in power are.

They take zealous action against those who aren’t the ‘politically correct’ choice of the day, while giving others a free pass.

Personally, I place more blame on politicians than the police for this. I imagine that most front-line officers are quite appalled at the situations they’ve been put into and the hypocrisy that has been on display, and those decisions are made by higher-up, bureaucratic officials who are beholden to the politicians.

If you’ve been reading my articles for a while, you know that I have been warning about the danger of Trudeau’s ‘Post-National-State’ idea for some time.

And the reason I warn about it is because the idea of a nation being ‘post-national’ is incredibly dangerous.

It creates a vacuum of identity, and that vacuum will not remain unfilled for long.

Further, young people who are taught that Canada is nothing but a ‘colonizer’ and ‘oppressive’ nation, will not only have a vacuum of identity, but will indeed construct their identity around hatred and opposition to the country they live in.

And thus, we see the consequences today.

Then, the discovery of unmarked burial sites – which are still being referred to as ‘mass graves’ despite the need for more nuance, are the final match that has set off those who were already primed.

As you can see, there’s no vacuum of identity among those who are tearing down statues. There is in fact a strong, anti-Canada identity that has formed in complete opposition to this country, and we are witnessing the results.

What did the political elites expect?

Pushing ‘Post-Nationalism’ was a short-term move for the political elites, who saw a way to harness increasingly radical sentiment for political gain.

But of course, that can only work for so long.

The political elites have power because they are at the top of the Canadian political system.

That system is based upon Canada’s history, and hence relies upon the legitimacy of Canada as a nation.

If that legitimacy is eroded by those in power, then their power will at some point erode as well.

Further, emboldening the destruction and removal of monuments without public discussion means emboldening lawlessness, which can lead to the breakdown of society.

In all honesty, I’m not even a big fan of the Royal Family, and would prefer that Canada’s head of state is elected directly by the Canadian People.

However, that doesn’t mean tearing down monuments, since change in the future doesn’t erase the reality of Canada’s past. Further, any decision on moving a monument or statue must be made through the democratic process, not by mobs of people tearing down whatever they want.

Additionally, it is essential to realize that the values upon which Canada is based, including our historic defence of individual freedom and the many thousands of Canadians who gave their lives in the fight against Communism and Fascism, are values that were handed down to us through Western Civilization, including our connection to the United Kingdom.

To abandon all of that in the name of political correctness would be to abandon the foundation of our nation, and that would be a horrendous mistake.

On Twitter, Andrew Lawton posted the following photo and quote from George Orwell: 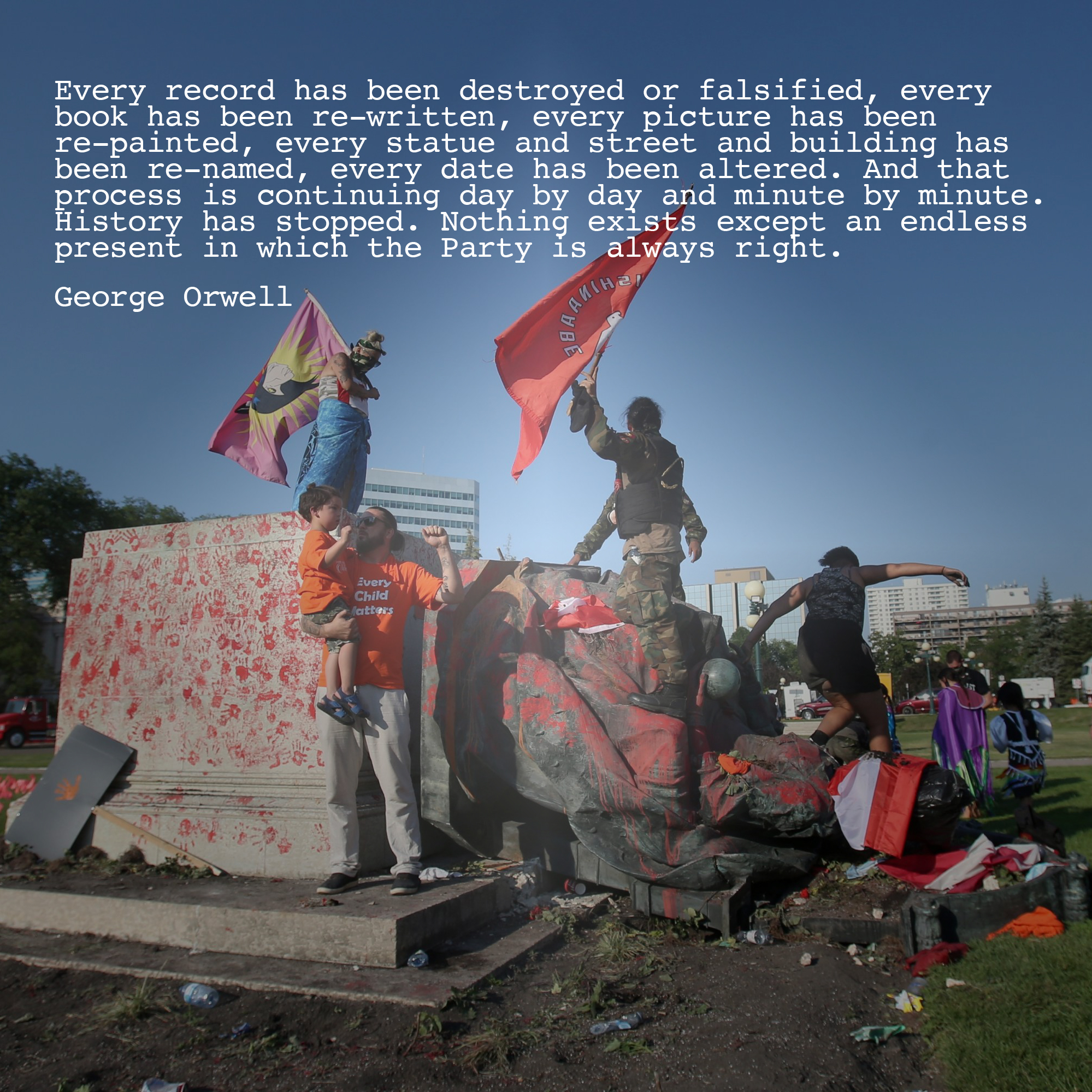 This is indeed a disturbing moment in Canada, and it won’t be easily dealt with. Politicians like Justin Trudeau – and even some ‘conservatives’ have been emboldening those who want to tear down this country, all in the hope that the radicalization will somehow politically spare them, or help them win a few elections.

But that is not a price we can pay, because the price is the future of our country.

Canada’s freedom was secured through the sacrifice in war of those who came before us, and our nation was built by hard-working Patriotic people who left us a country that is worth standing up for, and worth celebrating.

What our country needs more than anything else right now is for people like us to speak out with confidence and pride in Canada, and refuse to be manipulated through manufactured guilt and shame.

If you support Spencer’s work, you can contribute through PayPal, or directly through Stripe.