This is the latest in a pattern of statements from powerful organizations and politicians who seem a bit too happy about the ‘opportunity’ posed by suffering.

The World Economic Forum tweeted out an appalling message, seeming to celebrate lockdowns for ‘improving cities.’ 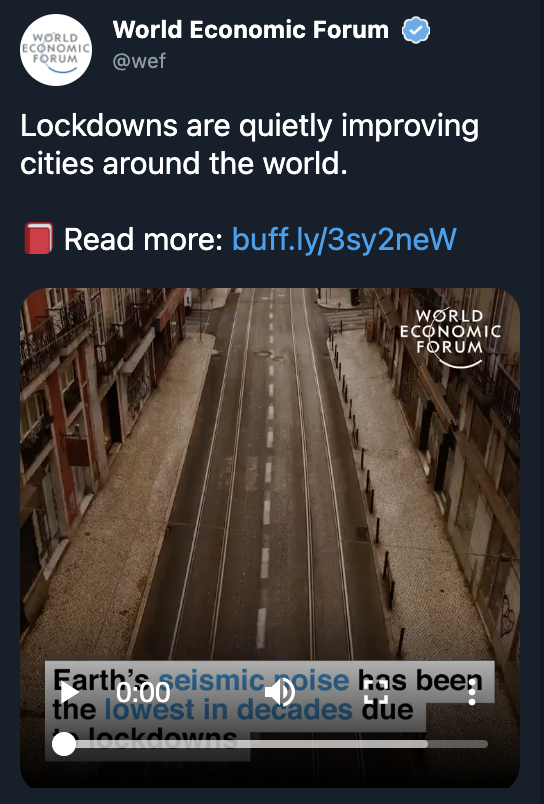 “We’re deleting this tweet. Lockdowns aren’t “quietly improving cities” around the world. But they are an important part of the public health response to COVID-19.”

We’re deleting this tweet. Lockdowns aren’t “quietly improving cities” around the world. But they are an important part of the public health response to COVID-19. pic.twitter.com/D2Pyb9x4yy

Of course, the deletion only happened after a massive backlash:

You should never say the quiet part out loud.

Not just that – a tweet actually celebrating the absence of humans, from places built by humans for human habitation. Tweeted by humans.

The WEF is the same organization that told us “you’ll own nothing and be happy,” and are pushing ‘The Great Reset,’ so they have no credibility with people at this point.

Over and over again, we have seen how the elites have sought to exploit this crisis to push their agenda, rather than thinking about the suffering so many people are going through.

The elites have shown themselves to all too often lack both common sense and compassion, and they have no right to dictate our future to us.

Canada needs Independent Voices like Spencer Fernando now more than ever. If you would like to support Spencer Fernando’s writing, you can contribute at the button below: