Does anyone really believe inflation is only 1.1%?

The government claims the inflation rate is only 1.1%.

Do you believe this?

I’m going to go out on a limb, and guess the answer is probably “no.”

Everyone is seeing the cost of living rise, amid new taxes, excessive money creation by the central bank, massive government spending, and of course the housing market – based heavily on foreign speculation that is pricing Canadians out of our own cities.

Does $200 in groceries feel like it goes as far as it used to?

Here’s what the government claims is happening with inflation: 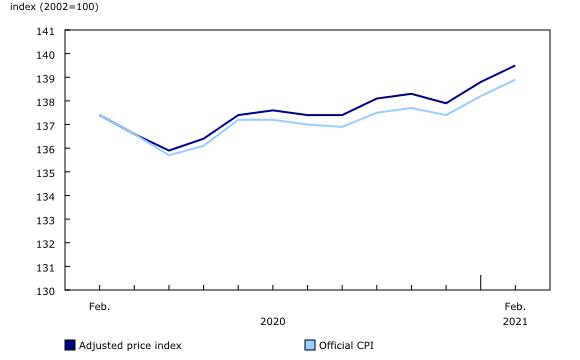 How would the government lie?

First of all, as they admit, the weighting of the consumer price index hasn’t been updated to account for the dramatic shifts in household purchasing:

“Shifts in household purchasing patterns have implications for the basket weights used to measure consumer price inflation. A fixed-basket price index, such as the official CPI, can only reflect such changes when basket weights are updated. The official CPI basket weights will be updated with the release of the June CPI, on July 28, 2021.

In partnership with the Bank of Canada, Statistics Canada obtained temporary access to aggregate data on recent expenditures representing the majority of consumer goods and services. These data reflect the altered consumption patterns during the pandemic and were used, along with other available alternative data sources, to derive the monthly adjusted basket weights used to calculate the adjusted price index. This adjusted series provides an alternative estimate of consumer price inflation during the pandemic. With this release, the adjusted price indexes for the period from December 2020 to February 2021 are published.”

Yet, while the government claims they are ‘adjusting’ the numbers accordingly, that adjustment itself is the problem.

The government purposely seeks to use the cheapest item in their ‘basket’ of goods, allowing them to claim the lowest possible inflation rate:

“One of the bigger issues traders and economists have with the CPI is substitution bias. When measuring products for the basket, they’ll substitute what they call “comparable items” for the cheapest one. StatsCan uses the example of coffee and tea. If coffee is cheaper, they’ll use coffee. If tea is cheaper, they’ll use tea. Unfortunately, reality doesn’t work that way. Your millennial ass that’s powered by coffee isn’t going to switch to tea because it’s cheaper. Tracking prices and assuming consumers will always switch to the cheaper product isn’t an accurate way to gauge how the cost of living changes.”

How would the government lie?

As we already saw above, the government has inflation ‘measured’ and ‘adjusted’ in such a way that it ensures the lowest possible number.

And that was before this past year, and before the seeming shift to modern monetary theory, a dangerous idea in which limitless money printing is only constrained by inflation – providing yet another incentive for governments to downplay inflation.

Further, governments, individuals, and businesses are more indebted than ever before, as an increasingly broken economy (even before the pandemic) has been kept limping along because cheap debt – which of course can’t go on forever.

Our economy is increasingly a house of cards, with ‘growth’ based not on actual productivity, but on rising immigration (GDP will of course get bigger if there are more people, but per capita is what really matters), an out-of-control housing market, and money printing.

Governments also want inflation to appear low because the higher it goes the more they have to pay in assistance to seniors, and those on welfare.

A fake economy will inevitably be exposed

The fact is, after a year in which we’ve learned more than ever that the government is both dishonest and incompetent, it would be foolish to somehow believe them all of a sudden on the inflation rate, when all their incentives lean towards convincing us inflation is low.

The evidence of our own experience and our own lives tells us the government is lying to us, and that inflation is much higher than they claim.

In reality, we are getting poorer in real terms, and no amount of government deception can change that.

Our economy is increasingly ‘fake,’ in that it is less and less based on real productivity, and is based on the government trying to inflate one bubble after another and keep it all afloat by pumping out as much money as possible.

Inevitably, the underlying ‘fakeness’ of all of this will be seen by more and more people, and confidence will be lost.

When that happens, we will have a choice of accepting economic reality sooner (meaning getting back towards balanced budgets, stopping the artificial suppression of interest rates, and ending the pretension that printing money actually generates wealth), or we can sink deeper into solipsism, and invite an even worse crisis that forces us to reckon with reality from a much worse position.

Given what we’ve seen from this government and politicians across the political spectrum, chances are that we will end up seeing the latter, as there are far too many people in positions of power with an interest in keeping the current broken system going for as long as they possibly can.

And with the Liberals – as Chrystia Freeland said – using the ‘political opportunity’ of a crisis, they are going to double-down on the big-spending, money printing policies that have put Canada into such a precarious situation in the first place.