“Why have principles when you can spend all your time pandering?”

That seems to be the motto of Canada’s top political parties, the Liberals, Conservatives, and NDP.

Those parties now often seem increasingly interchangeable, in rhetoric and – most disturbingly – in policy.

While that may seem controversial to say, imagine for a moment that you were a Citizen of another country and were doing a quick study of Canadian politics.

What would you see when looking at the main parties?

All three support running large budget deficits, with even the conservatives saying they’ll run Canada in the red for another decade.

All three have bought into the politically-correct framing of Canada and our history.

All three will take every opportunity to pander to Quebec.

All three support continued high-immigration levels, regardless of public opinion.

All three pushed a similar narrative on lockdowns (with slight variation), and generally ignored the importance of physical health and resilience.

Those are some of the biggest issues facing the country. Despite the small differences between the parties, we can see that there is a widespread similarity in the approach of the parties.

Indeed, you would probably look at these parties and seem them as largely interchangeable, regardless of what the name of their party is.

Now, it is important to note that this doesn’t mean their members or even their elected officials are all the same.

Further, many CPC MPs are indeed quite conservative, yet are nonetheless going along with a clear shift to the left for their party.

Quebec continues to get their way

Quebec has clearly understood the present moment in Canadian politics, and is exploiting it to the max.

With all the main parties desperate for votes in Quebec, they are willing to continually give in.

Consider the latest, as Trudeau is set to declare French as the sole official language in the province:

“The Trudeau government will legislate to formally recognize French as the official language of Quebec, La Presse reported on Monday.

The recognition will be contained in an amendment to Ottawa’s Official Languages Act that will be tabled by Languages Minister Mélanie Joly before the end of the present session of Parliament.

The recognition by Ottawa will be unprecedented by a federal Liberal government, which up until now has promoted bilingualism across the country.

Citing sources within the government, the report notes that the amendment will also maintain the federal government’s obligations to linguistic minorities across the country — including anglophones in Quebec.

The amendment results from an expression of concern by the Trudeau government in the last Throne Speech that the federal government has a responsibility to protect and promote the French language, not just outside of Quebec but within it as well.

News of the amendment comes as the Quebec government headed by François Legault prepares to adopt Bill 96, a reform of Bill 101, the province’s language law.”

Remember how we always get told that Canada is ‘officially bilingual’ as a ‘justification’ for a public service that demands bilingualism even when it doesn’t make much sense?

That’s the argument that was used to push back against anyone – often conservatives – who questioned what has become a public service that is unrepresentative of much of the country, especially Western Canada.

Yet now, all of a sudden, with an election looming and Quebec votes up for grabs, that is all being thrown out.

Decades of policy, decades of rhetoric, all gone for the sake of political whims.

And don’t expect the CPC to push back against this – though if they did I would be pleasantly surprised – since they have also stood with Justin Trudeau in supporting Quebec unilaterally changing the constitution, something which is causing growing internal discontent in the party, as you can see in this letter to Erin O’Toole from the Sarnia Lambton CPC EDA: 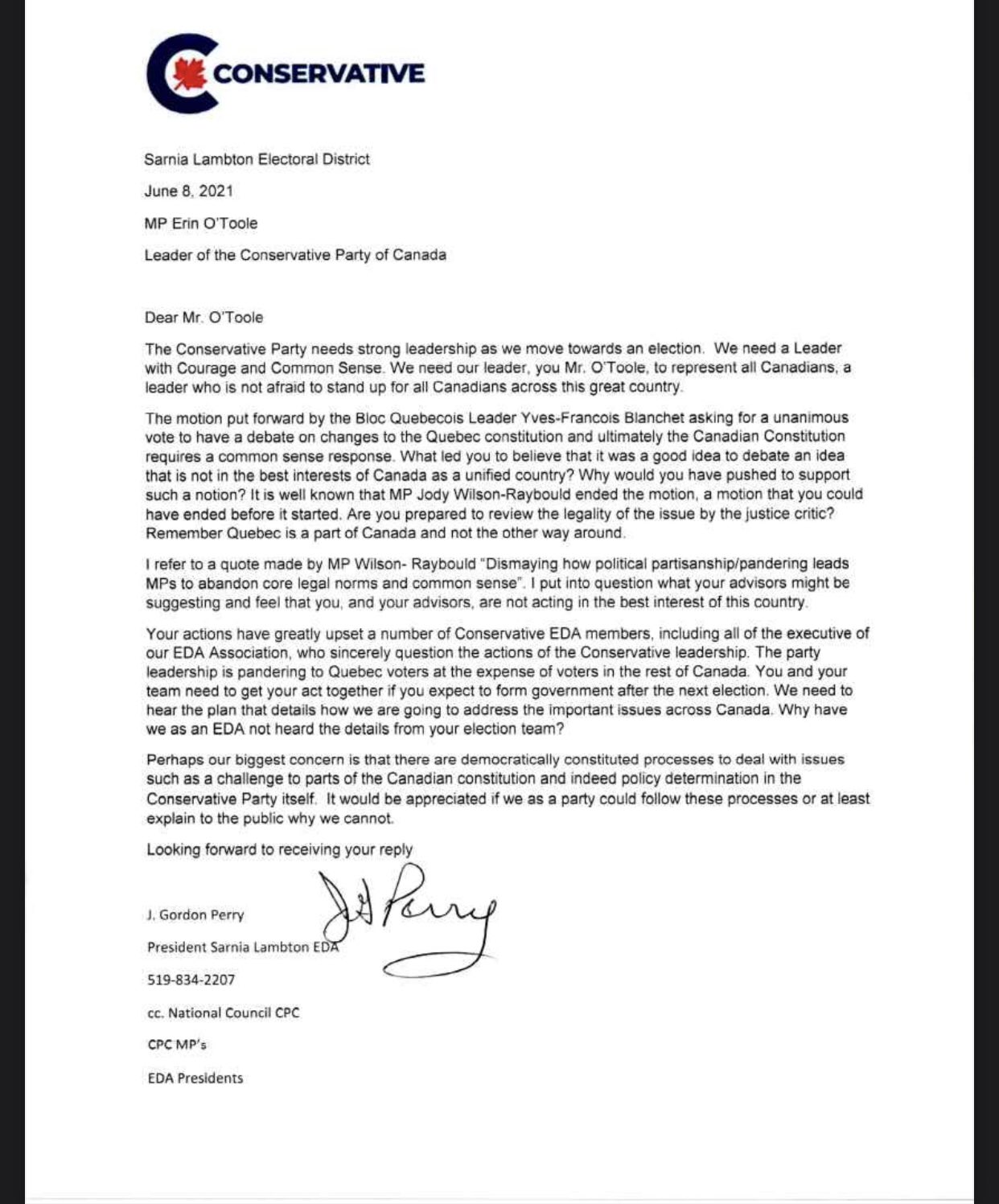 This part in particular is worth quoting:

“The party leadership is pandering to Quebec voters at the expense of voters in the rest of Canada. You and your team need to get your act together if you expect to form government after the next election.”

If the CPC was also supporting other provinces in such a clear way – for example supporting Alberta getting out of the equalization system – then they could at least coherently say they are pushing for more provincial rights and autonomy.

But instead, this seems to be a mostly one-sided situation, where Quebec gets more power even as the centralized power status quo stays in place in the rest of the country.

Further, we saw last week how the CPC has been moving towards a far-left narrative following the terrible events in London, Ontario.

If even the ‘conservative’ party is talking like this, it means that not has a left-wing narrative become dominant, but a far-left narrative is now in control.

Again, this can’t be emphasized enough.

The CPC – not all but some elements in the party – is now increasingly lining up with a far-left, even neo-Marxist worldview, that has replaced class conflict with a narrative of ‘racial conflict’ and ‘oppressor vs victim.’

To embrace such a narrative – which the Liberals and NDP are already ‘all-in’ on – represents the complete surrender of Canada’s political class to what is essentially a hostile worldview, and this means the disenfranchisement of the many millions of Canadians who oppose it.

At every step of the way, the CPC seems to be moving further to the left, which of course leads to the ‘centre’ shifting left, and the Liberals and NDP then have more room to go still further left, where the CPC again chases them and continues the trend.

Of course, this pandering Olympics trend represents the creation of a vacuum, an empty space in Canada’s political market which will of course soon be filled.

There are still many millions of conservative Canadians, and people who abhor the trend of virtue-signalling and pandering.

If the CPC doesn’t fulfill the needs of that market, then others will.

And anecdotally, this is already taking place, with some surveys showing a rise in support for the PPC and Maverick Party. Additionally, with it seeming increasingly likely that Derek Sloan will be launching some sort of new party or movement, the CPC will face even further competition for conservative votes, an inevitable result of their move towards the left.

What all this means is that this moment of pandering will not go without challenge, and parties – particularly conservative parties – will pay a price if they refuse to change course.

If you value my Independent Canadian perspective, you can make a contribution through PayPal, or directly through Stripe. Your support is deeply appreciated.