Many Canadians like to think of our country as a ‘compassionate’ place. But without the strength to defend ourselves or others, what good is that compassion?

Is Canada a compassionate nation?

The initial instinctual answer is to say ‘yes.’

Our political leaders talk about compassion all the time.

In an obvious nod to market research, companies run ads in Canada all the time appealing to the sense that we are ‘compassionate’ or ‘nice.’

Without even thinking much about it, ‘compassion’ and ‘Canada’ seem to go hand in hand.

Are we actually a compassionate nation?

Or, are we a weak nation that is fooling ourselves into thinking our weakness is somehow a virtue?

In response to the ISIS-K attack in Afghanistan, which killed 12 U.S. Service Members and roughly 60 Afghan Citizens, Mike Cernovich Tweeted this:

“This is what weakness gets you.”

This is what weakness gets you.

He is absolutely right.

Say whatever you want about Donald Trump, but he certainly understood that the President of the United States shouldn’t pretend to be some sort of passive observer to events. With the world’s most powerful military, and dealing with foreign regimes often run by brutal human beings, the threat of force – and a willingness to use that force – ends up making actual peace more likely.

By contrast, the Biden Administration is giving off the impression of weakness, and weakness emboldens brutal people to take advantage.

That’s where the idea of ‘peace through strength’ comes from, an acknowledgment that any potential adversary has to first take you seriously before you can negotiate in anything resembling good faith.

While Canada is nowhere near the power level of the United States, we are still a wealthy, technologically advanced nation.

And yes, we are straight up abandoning them, as this letter from the Canadian government to people in the country makes clear: 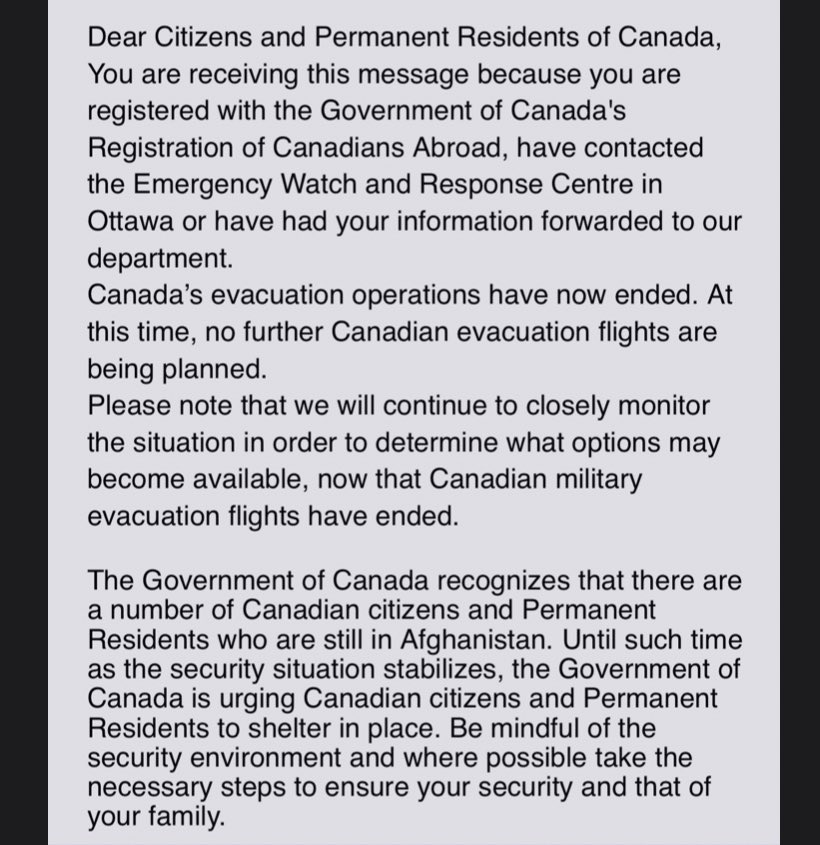 They could have saved some time and simply wrote “you’re all on your own!”

Further, despite knowing for many months when the U.S. planned to leave, thus giving Canada ample room to have gotten our people and helpers out of the country, the Trudeau government has said they had no choice but to shut everything down once the U.S. started pulling out of the country.

But other countries aren’t doing the same thing.

For example, the U.K. is continuing flights out of Afghanistan to get people out of there.

That’s because the U.K. makes a decent level of investment in their Armed Forces, while Canada has let our investment languish for decades.

And this is where the fundamental opposition between weakness & compassion comes in.

As Canadians, we can talk all we want about how ‘nice’ or how ‘compassionate’ we are.

But all that talk is worthless.

When the chips were down, when we had to actually act on our compassion and turn it into reality, we failed.

And we failed because we are weak.

Sure, we can directly blame Trudeau, and he does indeed need to be defeated for his incompetence and dishonesty.

But it’s more than just him.

Canadians have for years simply gone along with the lack of investment in our armed forces.

Many Canadians think we can spend our money better elsewhere, and assume that the military will just take care of itself, and are then shocked to see how unprepared and dependent on others we are.

Not a serious country

The fact is, Canada can no longer really call itself a serious country.

Not when Justin Trudeau ‘represents us.’

Not when we go around pushing naïve ‘wokeness’ that makes us a laughing stock around the world.

Not when we have basically zero capability to defend ourselves or help our allies.

And not when our words are nothing but empty platitudes we can never truly act upon.

Not a compassionate country

I’m going to go a step further and say that not only is Canada unable to act on our compassion, we aren’t really that compassionate a country either.

I say that because when there is a gigantic gap between what people say, and what people do, you have to look at the actions.

Letting our nation become weak and unserious was a choice.

It was a choice made by Canadians who backed politicians who told them everything they wanted to hear.

And it was a choice made by those who let our armed forces crumble.

When that choice was made – repeatedly – other choices were made as well.

Choosing to be weak means being unable to defend our own Citizens.

Choosing to be weak means being unable to defend our allies.

Choosing to be weak means being unable to defend those who helped us – like the many Afghans who put their lives (and their families’ lives) on the line for Canadian troops.

And choosing to be weak means we have decided that empty platitudes will be the sum total of our contribution, a contribution that is of course rendered meaningless when push comes to shove.

Look where we are now

This is a clarifying moment.

We have coasted along on empty words and ‘good feelings’ for so long, we’ve bought into so much woke BS, that many Canadians are absolutely horrified to find out that – lo and behold – military force and the willingness to use it still matters far more than being ‘nice people.’

The shock that many feel at this reality, and the shock many feel watching Canada abandon our own people and those who helped our people, can lead in one of two directions.

We can simply wish it all away, go back into our cocoon of being ‘the nice country,’ and continue down the path of weakness, or we can wake up, recognize that this world is still often a harsh and brutal place, and decide to become a stronger nation that can actually act upon what we claim to value.

If you support my writing, you can make a contribution through PayPal, or directly through Stripe below. Your support is always appreciated!